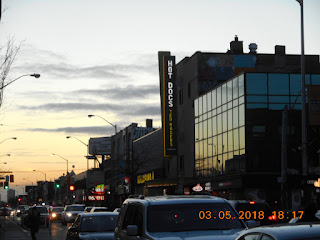 Not a bad start to May, if I may say so myself. Reasonably warm temperatures and darn sunny out there. Will not complain and I'm hoping that April took the last of this very long winter with it.


Found another video by a singer who has been unearthed from the submerged nine-tenths portion of that huge iceberg of old Japanese pop. Yoko Oda（小田陽子）has a very limited J-Wiki entry which basically only consists of her discography and then media appearances. Plus, her website has been erased.

What I could find out was that she comes from Osaka and made her debut in 1982, releasing 5 singles up to 1986 and 5 albums including her latest in 2006. The song here is "Sunset Lonely Girl" from her September 1988 3rd album "Half-Swing Romance". In a way, this melancholy ballad reflects the fact that she's become a bit of a mystery lady (her haunting vocals help out there), and I enjoy the song for its arrangement bringing together elements of European jazz and some late 1980s Japanese sophisticated pop. Perhaps I can venture the theory that this could have been the sort of song that Taeko Ohnuki（大貫妙子）could have released if she had continued on her European pop sense from the late 1970s and early 1980s.

There were some pretty big names behind this song in itself. Kazumi Yasui（安井かずみ）wrote the lyrics with Shigeru Suzuki（鈴木茂）providing the gently lilting melody. According to the information for the YouTube video, Suzuki himself was also on the guitar with Minako Yoshida（吉田美奈子）even providing backing vocals.
Posted by J-Canuck at 8:23 PM