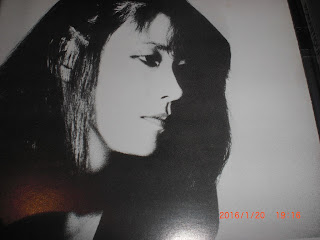 In the past number of months, I had been getting the feeling that my talk on the blog about Taeko Ohnuki's（大貫妙子）early material (1976-1984) was completed since I've gone over almost every one of her earliest albums twice and put a spotlight on many of her individual tracks and singles. But in the last few days, I was finding a few more nuggets here and there by the singer-songwriter.


Finding this particular Ohnuki entry has had me thinking about which to get, the original album before it gets sold out...perhaps permanently...or hope and wait for that remastered re-issue with extra tracks. I did snatch up her 4th album "Romantique" (1980) in its original CD state when I was back in Japan, but I've then heard that it was given a later re-release with an extra bonus song. This is "Ai ni Sukuwaretai" (Wanna Be Saved By Love) which was actually the B-side to her 7th single "Futari"（ふたり）from January 1981.

Now, I guess this is the point where I have to politely disagree with Ohnuki. I have enjoyed "Ai ni Sukuwaretai", a breezy Latin-flavoured uptempo tune in the same vein of a Junko Yagami（八神純子）number from around the same time. However from what I read in Ohnuki's description of the song through a couple of interviews (via the J-Wiki article for "Romantique") in both the October 1983 issue of "Music Steady"（ミュージック・ステディ）and in the liner notes for the re-release of "Romantique", it almost sounds as if she was willing to disown it. Well, perhaps, "disown" is a fairly harsh assessment of what she said but I could almost hear her shrug her shoulders when she gave her opinion, of which part could be translated as "I laugh sardonically at the fact that I had actually also crafted this kind of song". She also remarked that it really didn't sound like her.

Well, to be honest, my English translation of the title does sound cornier than an Iowa field in October, and her vocals sound a little different when compared to her other songs although it is definitely Ohnuki. Perhaps she was getting some of those post-traumatic vibes of "Mignonne" with "Ai ni Sukuwaretai" in which case the song could have been better placed on a remastered version of that album. However, considering that Ohnuki had been trying all sorts of genres at the time including Latin, technopop, European, etc., I don't think she should give this song any short shrift. It's a perfectly fine tune although it may not rate as one of her very best, and it's hard to imagine any of her individual songs as less than interesting. This one is no different since although I have classified it in the City Pop/AOR/Pop genres, ultimately it is most solidly pop in my estimation with some peeks into the first two genres.

In the end, maybe Ohnuki sees the song "Ai ni Sukuwaretai" in the same vein as she she views the album "Mignonne", a relative failure. And yet, in recent months, a few of the tracks from that 1978 release have become very popular on YouTube. I've certainly treated "Mignonne" as a redeemed favourite.
Posted by J-Canuck at 3:17 PM