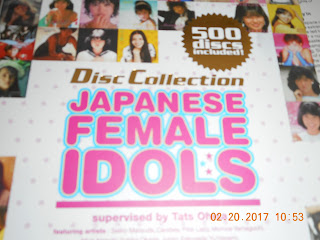 Well, it's Hump Day here in Toronto which just means Wednesday so I figure readers at "Kayo Kyoku Plus" may be feeling some of that mid-week stress. So why not bring in something slightly jauntier?

Going into the vaults, I found Junko Sakurada's（桜田淳子）8th single "Hajimete no Dekigoto" which I will translate as The First Happening. Although that translation sounds like a prequel to the sci-fi movie "Close Encounters of the Third Kind", it's actually a sweet little story of a teenage girl reacting to getting her first kiss from the boy that she had already liked. Must have been exhilarating and traumatic at the same time.

Written by Yu Aku（阿久悠）and composed by Koichi Morita（森田公一）, it's what one would expect from an uptempo aidoru tune of the 1970s: lots of country-style skipping paired with the horns and some insertion of the rumbling drum and bass.


But that was from the performance on the TV show. The recorded version also has those shimmering strings and even some nice echoing keyboard with the same skipping arrangement. Perhaps it's expressing the lass' heartbeat or even the lass herself running and jumping around in her room after the happening.

For Sakurada, "Hajimete no Dekigoto", which was released in December 1974, was her very first and only No. 1 record, and even with many months before the 1975 Oricon annual rankings, it managed to become the 11th-ranked single. Around 527,000 records were sold and the song earned her second invitation to the Kohaku Utagassen at the end of 1975. Not sure whether "Hajimete no Dekigoto" made it onto an original album but it is available on "Golden Best ~ Sakurada Junko"（GOLDEN☆BEST 桜田淳子）.
Posted by J-Canuck at 3:38 PM