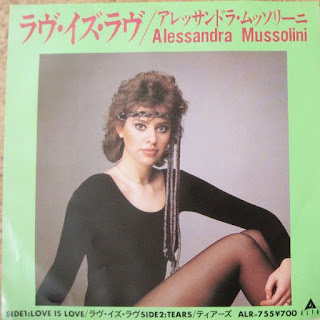 I was probably too harsh and unfair when I said Alessandra Mussolini's album "Amore" (1982) was bad and had only two nice songs, the already covered “Tokyo Fantasy” and “Amai Kioku”. After listening to the full album a few more times, I can say that I’m totally okay with all eight songs right now, and the reason why I’ve changed my opinion is basically because I came to accept the album for what it really is, instead of wanting more songs like the two aforementioned Japanese-language ones.

From the other six songs on “Amore”, four of them were sung in Mussolini’s own language, Italian, while second single “Love Is Love / Tears” was sung in English. So, there’s some variety in the album, and even the atmosphere of the different language songs is diverse, since the Italian material, besides the language itself, have that strong Mediterranean touch in the arrangement and a more romantic feel, typical of countries embedded in Latin traditions (Brazil included). The same can be said about the two Japanese-language songs, since they don’t seem like strangers in the Japanese music market.

As for “Love Is Love / Tears”, the two English-language songs, they are also kind of different from the rest in their own way. In the case of “Love Is Love”, which is our featured song of today, we can say it’s that kind of sleazy disco song that would not sound out of place in a hazy cabaret, with Mussolini longing for her lover to come back and, well, make love to her again. I can almost picture the woman rolling in a bed hugged with a pillow while singing this piece of dirty Eurodisco, and the song itself, even if kind of silly with all the ‘love is love’ repetition, is backed by a relentless and vigorous bass line punctuated by insertions of wonderful sharp synths. All of this while Mussolini seductively sings lines such as “just try me again and you’ll see / the chains of your love makes me free”.
Posted by Marcos V. at 10:55 AM