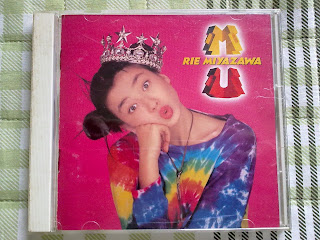 It’s something we all know, but let’s just say it again: Rie Miyazawa (宮沢りえ) is a really weak singer. Period. However, her debut album, “MU”, is one of my huge guilty pleasures, since it perfectly sounds like a 1989 aidoru pop album should sound… at least in my mind. Released later in the aforementioned year, more specifically in November, the production is ridiculously dated for nowadays standards, but I can almost feel how fresh it sounded back then with all those sparkling synths and overall happy melodies. Also, the front cover, with the quirky-faced Miyazawa and strong pink background, is quite iconic and a great showcase of the excesses that permeated Japan’s bubble era. Only Chisato Moritaka (森高千里) and the cover of her “Hijitsuryokuha Sengen” (非実力派宣言) album, released in the same year, could possibly compete with “MU” in this department, if you ask me.

Talking about the songs, while “Dream Rush” is the well-known and catchy single produced by Tetsuya Komuro (小室哲哉), I like that the bright “Gokigen na Heart” (ごきげんなHeart) is the introduction to the album, since it’s easily my favorite from the whole collection. Another one of my favorites is third track “A.B.CD”, with its more laidback, gentle and even sophisticated vibe. Also, let’s not forget how the traditional-sounding synths are among the main charms of this song.

Yeah, I could totally live without the jazzy “Watashi wa Nani?” (わたしは何？) or the boring ballad “Waiting for You”, basically because Miyazawa needs the big, over-the-top production in order to mask her weak vocals, and those two songs are not good examples in this particular department. Instead of them, I like how cheerful the two euro-driven songs, “Yume Mite Goran yo” (夢見てごらんよ) and “Himitsu ga Ippai” (秘密がいっぱい), are. They unabashedly share their familiar sound with many songs released by other late 80s female aidoru singers, like Akiko Ikuina (生稲晃子) for example, but that’s probably why they’re so nostalgic and comforting in the first place.

(Unfortunately all other videos from the album were taken down.)

After “Yume Mite Goran yo” and “Himitsu ga Ippai”, I feel the album loses momentum,  and that's because of some not great slower and mid-tempo songs (reasons stated above). Still, last song, “Most”, kinds of returns to the mildly upbeat euro sound that made the album work, but it's not on a par with the best songs offered by Miyazawa on “MU”.

Even though Miyazawa did find some success in her singing career during her prime, I think, at least nowadays, she’s better remembered as an actress. As for “MU”, although I can’t say it’s great, I find it the perfect 1989 album, because it encapsulates the mainstream aidoru pop side of the market really well with all the “plastic” excess it showcases both in sound and image. For me, it’s a good reminder of how this particular side of the music industry sounded back then, and, somehow, it becomes even more valuable when we remember how Japan’s pop music was changing in the decade shift.