Can't believe it's been a whole year since the epic and often hilarious "Grand Blue"（ぐらんぶる）first appeared on the screen and had folks laughing up their internal organs like threatened sea cucumbers (and yes, I still watch the YouTube scenes). I don't think I've seen anything that funny since although "Kaguya-sama" earlier this year has come close.

However, I'm holding out some hope for this summer's "Danberu Nan-Kiro Moteru?"（ダンベル何キロ持てる?...How Heavy Are the Dumbbells You Lift?）. This was part of the rash of pilot episodes of Summer 2019's anime that my friend and I caught a few days ago, and it's definitely looking like a keeper. It's the first time I've ever seen a slice-of-life show surrounding a sports gym.


Certainly, the opening and ending themes have made things plenty attractive for me with their blast-from-the-past beats. The opening theme of "Onegai Muscle" (Please, Muscle, Please) by the two main seiyuu of Ai Fairouz（ファイルーズあい）and Kaito Ishikawa（石川界人）bring back memories of Rod Stewart's late 70s/early 80s days. I usually wait a while before putting up anison for currently running shows since the full versions don't come out for several weeks, but the earworm alerts have been ringing in my head, so I've decided to jump the gun and put up the opening now.With Sidechest Karasuya（サイドチェスト烏屋）taking care of lyrics and music and Six-Pack Shinozaki（シックスパック篠崎）helping out on the melody as well, "Onegai Muscle" is half-exhortation for exercise and half-disco tune.

For the ending, it's Sidechest, Six-Pack and seiyuu Ishikawa together again for "Macho A Name?" which almost sounds perfect as a song to be played in a gym for an actual aerobics session. It starts off as if it were going into hip-hop but then the refrain begins to reference another disco icon, The Village People...marching and transforming the tubbier ones into lean and mean fighting machines. 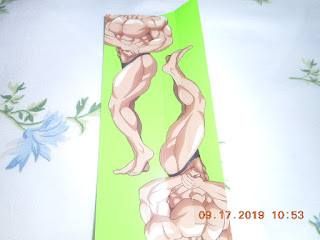 I had my time at a gym for about a year back in my Ichikawa days. All I can say is that I hope Ai's Hibiki-chan has far better success in shedding her excess weight than I ever did. Still, I have to admit that I've actually taken one exercise from the show to heart...I'm doing 3 reps of 10 squats daily.


One thing for sure....I will never react in the same way that Miss Soryuin does because of her muscle fetish. 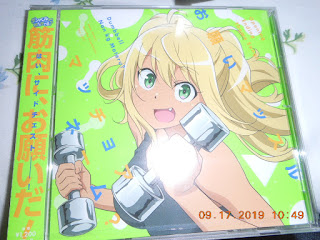 Well, anyone you recognize here?
Posted by J-Canuck at 3:22 PM