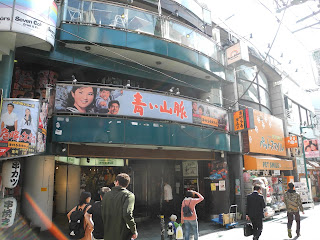 Last week on NHK's "Uta Kon"（うたコン）, the theme was comical kayo which definitely meant that the works of the comical band Hajime Hana & Crazy Cats（ハナ肇とクレージーキャッツ）would be included in the festivities. Sure enough, "Hai Sore Made yo" (Yeah, Until Then) was featured.

I\d never heard of this song until last Tuesday. For me, Crazy Cats, and notably the late Hitoshi Ueki（植木等）, meant "Suudara Bushi" (スーダラ節）from 1961. At the time, Ueki, through that 1961 hit and the Crazy Cats movies, was self-styling himself as Japan's most feckless man, and this apparently continued in a 1962 entry titled "Nippon Musekinin Jidai"（ニッポン無責任時代...Japan's Irresponsible Generation）. The main theme was "Musekinin Ichidai Otoko"（無責任一代男...Irresponsible Man of His Generation）which did come out as the Cats' 3rd single in July 1962.

The B-side was "Hai Sore Made yo" which is an interesting comical tune. First off, it has Mr. Irresponsible himself launch into a heart-on-his-sleeve Mood Kayo as his voice dips into a heartthrob baritone. But then, the usual Ueki nasal twang boomerangs back as his character seems to loudly lament the latest situation he has put himself in, thanks to his shenanigans. The music also returns to brash and brassy.


I'm not sure whether the above video is an actual scene from "Nippon Musekinin Jidai" but Ueki really puts in the performance as he switches from the usual Mood Kayo stroll of introspection to crazed comical and twisty. And may I say that is the largest performance space in an izakaya that I've ever seen.

Hiroaki Hagiwara（萩原哲晶）came up with the song while future Tokyo Governor and then-comedian Yukio Oshima（青島幸男）was the lyricist.
Posted by J-Canuck at 3:43 PM