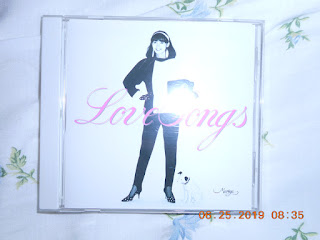 For some strange reason, before I purchased Mariya Takeuchi's（竹内まりや）"Love Songs" originally released in March 1980, I had assumed that this was a very early BEST compilation by the singer-songwriter. Perhaps it was because of the title and since Takeuchi is very well noted as a chanteuse of romantic ballads. However, it is actually her 3rd studio album following her fun and breezy "University Street" and the City Pop/J-AOR-full "Miss M".


I put "Love Songs" in the stereo for the first time in a long time, and hearing "Fly Away" as the top batter put a thrill up my spine as I heard Takeuchi's dulcet vocals and the supremely natsukashii arrangement through the trio of Carole Bayer Sager, Peter Allen and Gene Page. It's like listening to those old AM stations on the pink SONY radio again. There is that feeling of simply soaring slowly over the city at sunset as words and music flowed into my ears.


"Sayonara no Yoake"（さよならの夜明け...Daybreak for Goodbye）is a genteel and smooth track written by Takeuchi and composed by Tatsuro Yamashita（山下達郎）. I mentioned about "Fly Away" bringing back some of those memories of listening to the mellow music on radio. Well, "Sayonara no Yoake" does the same thing with the strings and keyboards making out some post-disco ballad, and then when that middle section with the chorus section slides right on in, everything seems quite all right with the world. Chuck Findley also weaves some magic with his flugelhorn. "Sayonara no Yoake" is the B-side to Mariya's 4th single, the boppy "Fushigi no Peach Pie"（不思議なピーチパイ...Strange Peach Pie）, and it makes for a nice contrast.


Takeuchi brings back some of her 1950s/1960s love song abilities with "Zouge Kaigan"（象牙海岸...Ivory Coast）. With Takashi Matsumoto（松本隆）as lyricist and Tetsuji Hayashi（林哲司）as composer, it's a bittersweet ballad about a woman suddenly getting a phone call from an old flame some three years after the fire died out and wondering about rekindling the embers. I thought it was interesting that the setting would be the Ivory Coast but then going through the lyrics, I realized that it was the former couple placing that name on a secret cove that they discovered way back when.


One of my favourites on "Love Songs" happens to be "Gosenshi"（五線紙...Music Paper）where Takeuchi has the wonderful backup chorus consisting of composer Yasuhiro Abe（安部恭弘）, singer EPO and producer Shigeki Miyata（宮田茂樹）. It sounds like a nice little piece of country swing jazz created by a cadre of good buddies as the singer provides a doo-wop-friendly story of the old days of a band just starting out and paying their dues. Matsumoto also provides lyrics here.


My last song here is "Koi no Owari ni"（恋の終わりに...At the End of Love）which was written and composed by Takeuchi as a seeming cousin to Gloria Gaynor's classic "I Will Survive". The singer's challenge to her soon-to-be erstwhile lover is if this is going to be the end of the affair, then let's make the end as much of a whopper as possible. From listening to the other tracks on "Love Songs", I think "Koi no Owari ni" is the sole out-and-out City Pop tune on the album.

The happy-go-lucky "September", Mariya's 3rd single, and the aforementioned "Fushigi no Peach Pie" have their own entries on the blog. Listening to "Love Songs" with fresh ears anew, I feel that the album has that feeling of transition between "University Street" and "Miss M". Takeuchi is leaving the campus for good with still some lingering feelings for the old school and some anticipation for life in the big city. Nice to hear it again.
Posted by J-Canuck at 3:11 PM