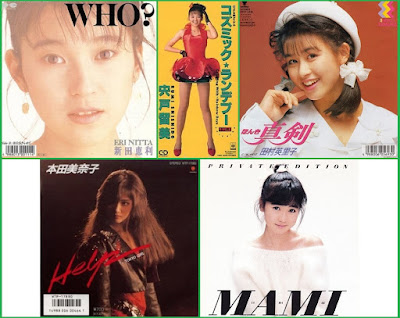 Starting off this list with Eri Nitta’s (新田恵利) awkward, but surprisingly captivating baby voice, “WHO?” is a bouncy and serviceable Eurobeat song released in 1988. Even though I still feel Nitta’s voice was a joke, I actually find it full of personality here, and the chorus is quite catchy as well. Nothing groundbreaking, but it deserves a listen, even if just for the fun.

(The lower video is for those who
couldn't see the upper video due to availability
limitations.)

It’s been just a few days since I talked about Minako Honda’s (本田美奈子) English language “OVERSEA” album here on the blog, but now I want to highlight one of her Japanese songs, and a rather rare one, called “Tokyo Girl”. Released as the coupling song to her single “Help”, in 1986, “Tokyo Girl” is a very nice pop song, and I just love the way Honda almost dramatically sings “You are Tokyo girl…” and “I am London boy…”, or the opposite, during the choruses. I can’t help but sing along with her.

When I see the name Mami Yamase (山瀬まみ), it’s her wacky and punky persona that comes to mind. However, before committing to this particular style, her career started in a more traditional aidoru route. And even during her “normal” days, she was still able to surprise us with things like “Aishuu no Barcelona” (哀愁のバルセロナ), a dramatically-sung track with a cold and ominous Euro/synthpop arrangement included in the album “PRIVATE EDITION”, from late 1987.

Just like Mami Yamase, Rumi Shishido (宍戸留美) also recorded traditional aidoru pop before doing her more experimental stuff, and her debut single, “Cosmic Rendezvous” (コズミック・ランデブー), is probably the best example of it. Released in 1990, I just love the mess that is the cute-faced Shishido singing this aidoru/Techno Kayo tune while showing her long legs in a Moritaka Chisato-esque (森高千里) outfit and doing a choreography with a stick.

The talented and voluptuous Eriko Tamura (田村英里子) is the aidoru behind today’s final song. Called “NEXT”, this over-the-top song is probably my favorite in all her discography, and the reason lies on the devastatingly dazzling Carnival-esque synth arrangement that permeates most of it. Other than that, well, Tamura can’t dance properly, but her awkward choreography is what makes the video so endearing in my opinion. “NEXT” was the coupling song to her single “Honki” (真剣), released in 1989.
Posted by Marcos V. at 1:43 PM