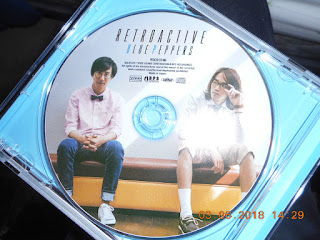 OK, Blue Peppers（ブルー・ペパーズ）...where have you been hiding your copy of Steely Dan's "Aja"?


A couple of days ago, I put up an Author's Pick on bossa nova/samba-influenced kayo. Now I'm wondering whether I should write something similar on Japanese songs that have been inspired by the sweet melodies by Walter Becker and Donald Fagen.

Good golly, I'm so glad that someone finally uploaded Blue Peppers' "Searchlight" from their 2017 album "Retroactive". This is so Steely Dan that if Fagen ever heard this, he probably would be rushing through his master tapes to see whether he and his late partner had ever created this. I'm not sure whether a name was ever placed on the distinctive Dan sound with the keyboards and guitar and horns: percolating grooves of velvet? In any case, Blue Peppers nailed it here.

Masato Inami（伊波真人）and one-half of Blue Peppers, Naoki Fukuda（福田直木）, who also worked on one of the other tracks on "Retroactive", "Akikaze no Regret"（秋風のリグレット...Autumn Wind Regret）, collaborated on "Searchlight", a cool night tune about a fellow who may be hitting the town...hard...to rid himself of the memories of a lost romance, a romance lost because of him. The last line in the song refers to the titular searchlight possibly exposing him as the heel he has been. From another angle, the song could even be a chapter in a noirish detective novel featuring Mike Hammer getting hammered because he dropped a hammer on his love life (yeah, that last part came up suddenly and it was too good to resist).

Listening to "Searchlight" and the rest of the album, as I did earlier today, has given me a good feeling about getting "Retroactive" in the first place, and I can only hope that Blue Peppers will record their next album really soon. In the meantime, I'm going to listen to "Deacon Blues" and "Peg" by Steely Dan for the umpteenth time.