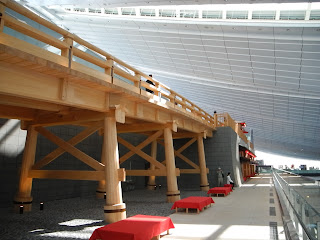 When it comes to flying, I have a dual feeling of anticipation and dread. The anticipation comes from the fact that I usually head off to Japan and so I'm looking forward to seeing old friends, eating my favourite dishes and walking through some fine neighbourhoods in Tokyo and Chiba. However, the dread comes from the fact that I don't like flying due to one miserable time on a flight piled on with too much turbulence. Plus, the fact that I'm inside a pressurized tin can for half a day tends to wipe out any initial energy of enjoying returning to my old home for the better part of two decades.

The past two flights out of Pearson International to visit Tokyo were morning departures although the one in 2014 ended up becoming a late afternoon one due to the usual delays and the second one in 2017 had a lot of November rain come crashing down which did no one's mood any good. However, we did leave on time.


So, with that pre-ramble, here is "Morning Flight" from Takako Mamiya's（間宮貴子）1982 "Love Trip" album which seems to have reached a certain legendary status especially in the last few years with the gaining overseas interest in City Pop.

Man, I can only wish that my experiences with morning flights had the same joy and verve as Mamiya was expressing about "Morning Flight". Maybe I ought to order a cocktail once Air Canada gets into the air. The one reason that I've put this one up is that my friend Jerry McClellan, aka Come Along Radio has just provided a fine article on his Reddit account about "Love Trip" and the mysterious Ms. Mamiya.

"Morning Flight" is the Mamiya equivalent of refreshing orange juice on the Lido Deck on one of those gigantic Royal Caribbean ships. As Jerry mentions in his article, it has got that samba feeling although the morning might not be the most energy-laden time to do that sort of dancing. But that's OK since those horns, the sax and the keyboards will do that for you. My friend also cites that it is the most uptempo track on the album, and considering that whenever I hear the name Mamiya, I always think of her City Pop ballads first, I would tend to agree that "Morning Flight" is nice and bouncy.

Prolific lyricist Yoshiko Miura（三浦徳子）is behind the lyrics while Genji Sawai（沢井原兒）, a saxophonist and producer, provides the happy music. I wouldn't be surprised if that was indeed him on the sax in "Morning Flight". My compliments to the trumpet soloist as well.
Posted by J-Canuck at 2:38 PM