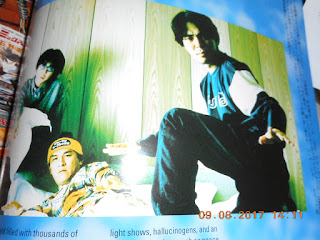 Had a late night at the clubs yesterday? Pray to the porcelain gods this morning? Well, maybe you ought to steer clear of the music video for this one.


Welcome to "Flashback Disco", the 10th single by techno unit Denki Groove（電気グルーヴ）from July 1999 (yep, 20 years ago). It's another pulsing and throbbing technopop creation by the group and leader Takkyu Ishino（石野卓球）that has been described in its J-Wiki article as the first single since the departure of Yoshinori Sunahara（砂原良徳）from Denki Groove. I'm not sure whether Sunahara was the resident lyricist but J-Wiki seems to intimate that it was his departure that meant that "Flashback Disco" was going to be an instrumental largely devoid of lyrics outside of variations on the words "flash" and "back". It apparently got some flack from critics saying that Denki Groove had lost its sense of humour, although it's still popular with the fans.


As for me, I don't have anything against "Flashback Disco" but then again as I've mentioned a number of times before, I was never much of a lyrics person. Plus, I think that Denki Groove's songs were always more about getting up and jumping about at a rave. Then, there is that weirdsmobile music video in which the setting looks like it had been inspired by one of my go-to spots in Tokyo, the Village Vanguard in the VenusFort mall in Odaiba, Tokyo. The above video is of the Village Vanguard in the bohemian neighbourhood of Shimo-Kitazawa. Let me tell you, this has absolutely no connection with the famed jazz club in New York City. Let's say that it's a massive shop of knick-knacks with a good dollop of "Stranger Things" sensitivities.


Anyways, getting back to "Flashback Disco", it managed to peak at No. 35 on Oricon. The song also got onto Denki Groove's 8th album "VOXXX" from January 2000, and that release went as high as No. 5.
Posted by J-Canuck at 2:11 PM