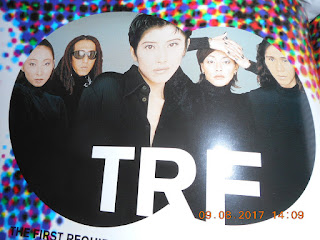 As I said back in the very first article for the song-and-dance group trf, "Boy Meets Girl", it was a couple of siblings who had introduced me to the group and the song. This was when Tetsuya Komuro's（小室哲哉）creation had already been well into ascent into the pop music troposphere. So when I did hit Japan in late 1994, I had to play some catch-up to find out more about what made trf tick.


Strangely enough, after putting up a lot of their discography onto the blog over the past 6 years, I had yet to write about their debut single. So here it is, "GOING 2 DANCE/OPEN YOUR MIND" from February 1993.

Listening to "GOING 2 DANCE", I felt that at the beginning, trf and Komuro really wanted to HIT the dance floor running, jumping and all of that other athletic stuff. Komuro and vocalist YU-KI wrote the lyrics while the former took care of the melody. As the lyrics state, trf did go to town with "GOING 2 DANCE" that was definitely the most dance clubbiest of the singles that I've heard by them. Was gonna make me sweat (although at my size this summer, picking up a paper clip from the grass can do that).


"OPEN MY MIND" did open my mind since that music video was probably the sexiest and strangest take that I had ever seen of trf. I wasn't quite sure whether YU-KI was going for a hybridized look of the Borg Queen and Betty Boop, though. But like its companion song, it definitely had more of the dance music and less of the pop that I would hear when the group really hit their stride. Komuro took care of both words and music here. Both songs would make it onto trf's debut album "trf 〜THIS IS THE TRUTH〜" which was released in the same month as the single. It would peak at No. 14.
Posted by J-Canuck at 7:42 PM