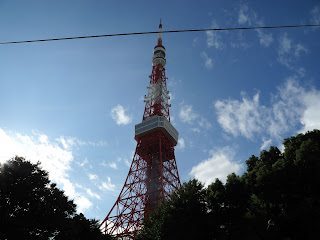 A couple of days ago, I was watching enka singer Hiroshi Itsuki's（五木ひろし）NHK music-variety show (I really ought to talk about that program sometime soon) which seems to get plugged into a time slot on TV Japan whenever the usual program has been pre-empted for whatever reason. The theme for the episode was Tokyo-based kayo, something that has also been done on "Uta Kon"（うたコン）in the past.


However, one of the songs that was featured was an old kayo that I had never heard before. It was titled "Tokyo no Sora, Aoi no Sora" (Tokyo Sky, Blue Sky) and the original singer was Haruo Oka（岡晴夫）, the same fellow who had sung the jaunty "Akogare no Hawaii Koro"（憧れのハワイ航路）in 1948. It's a song that I've heard myself over the decades but have only gotten to know and pay attention to in the last number of years.

"Tokyo no Sora, Aoi no Sora" was released in March 1949, and like the more famous "Akogare no Hawaii Koro", it's got plenty of jump. In fact, I would say that Yoshi Eguchi's（江口夜詩）music is quite the whirling dervish of kayo, probably to match Miyuki Ishimoto's（石本美由起）lyrics of a young couple painting the town red on what must have been one heck of a weekend date. I'm sure that Oka must have gotten quite the workout recording this in the booth. But it's got plenty of optimism; I don't know what the state of Tokyo was in 1949, some four years after the war had ended, but if it's anything like singer, lyricist and composer have described it, then perhaps the capital city was really turning a corner. Incidentally, both Eguchi and Ishimoto were also responsible for the creation of "Akogare no Hawaii Koro".


There's a clearer and crisper cover of the original song by Hachiro Kasuga（春日八郎）who recorded it in 1976 as a part of his album "Kasuga Hachiro Oka Haruo wo Utau"（春日八郎 岡晴夫を歌う...Hachiro Kasuga Sings Haruo Oka）. Listening to both versions, I got that feeling of Tokyo being that hive of industry and activity, and if I were to compare the tune to a Hollywood movie, I would think it was kinda like the first few minutes of "An American in Paris" with George Gershwin's magnificent score in the background.
Posted by J-Canuck at 8:46 PM