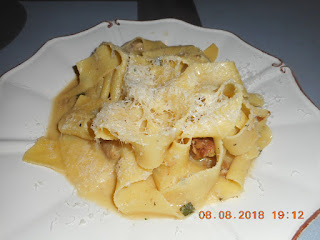 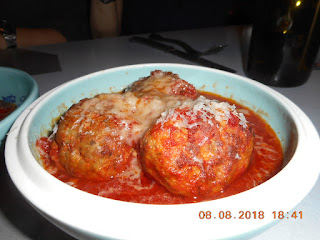 On Wednesday, my foodie friends and I went to this newly-opened Italian restaurant by the Bayview Village shopping mall called Parcheggio. For those who don't speak the language, parcheggio actually means parking area, and it's appropriate since the restaurant and its immediate foodie neighbours occupy a building which is plunk-down in the middle of the mall's parking lot.

Surprisingly for a new restaurant, Parcheggio's staff and food were already pretty top-notch. Heck, the maitre-d' and waiter shook my hand! The portions were also as generous as if I were at an Italian wedding. I did love that Veal Pappardelle.

Always nice to make new and pleasant discoveries. The same holds true for music, and just by chance, on the right side of the YouTube page, I saw a video by hip-hop group Kick The Can Crew called "Juusho" (Address). Now I'm not a hip-hop fan, and the only entry on "Kayo Kyoku Plus" that I have by the group consisting of MCs Little, MCU and Kreva has been their cover of Tatsuro Yamashita's（山下達郎）"Christmas Eve". But when I saw that J-funkster Yasuyuki Okamura（岡村靖幸）was in the mix, I was curious enough to take a look.

I will now thank my curiosity. Kick The Can Crew's latest single (their 16th and their first CD single in 15 years) won't be released as of this writing for another few weeks (August 29th 2018), but it's already hooking me in with its beats and rap by the four involved. Nifty video at the lived-in address featured for that happy young couple.
Posted by J-Canuck at 10:51 PM

Email ThisBlogThis!Share to TwitterShare to FacebookShare to Pinterest
Labels: 2018, Duet, J-R and B, Kick The Can Crew, Single, Yasuyuki Okamura