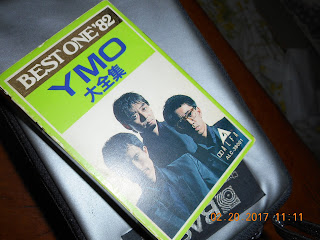 Well, I was only going to spotlight just one song from Yellow Magic Orchestra's debut self-titled album from November 1978 but decided that I might as well finish everything up as far as "Yellow Magic Orchestra" was concerned. I have already provided one article about the album so this is a follow-up, but just like the recent article that I did for Tatsuro Yamashita's（山下達郎）classic "For You", "Yellow Magic Orchestra" has been one of those releases whose tracks demanded their own individual articles, and they're already listed in the first article for the album. So it's basically cleanup time here.


Strangely enough, the story that I have to tell is an anecdote that I have yet to spell out in any of the other articles although I did hint at it in the original article for the album. During my trip to Japan in 1981 as part of the graduating class of the Toronto Japanese Language School, half of my journey involved staying with the relatives in Osaka and Wakayama Prefecture. One night when I was in Osaka with my uncle's family, they took me to the record shop since they knew I had been interested in Japanese music and I bought that 1978 audiotape of "Yellow Magic Orchestra".

And then, after I had said my goodbyes to my relatives, spent a few days at summer camp in the mountains of Okayama, and then returned to the Tokyo Prince Hotel for one last night before taking the plane back home, I broke out the SONY cherry-red double-deck cassette recorder (another purchase) and ripped the wrapping off of my tape and put it into my new device.

Much to my chagrin (and a number of YouTube commenters have said the same thing when they first heard the album), I got several seconds of computer game music. Why was I getting the theme from "Space Invaders" (actually it was "Circus")?! Now I knew that "Firecracker", the song that got me in love with YMO in the first place, was on the tape, but I did get worried about what else I was going to get. Was "Firecracker" going to be the only melodic track while everything else was game music, courtesy of Atari or Nintendo?

As it turned out, the bleeps and bloops did indeed make up the first track "COMPUTER GAME~Theme From The Circus", and it was indeed YMO who created it and not a game company. As I would later come to realize, Haruomi Hosono（細野晴臣）, Ryuichi Sakamoto（坂本龍一）and Yukihiro Takahashi（高橋ユキヒロ）had wanted to take some established genres of music in their early days and filter them through their various synthesizers and computers and dream machines, so why not even have some fun with computer game music itself?


"The Circus" launched Side A of the original tape and LP and the side ended with "Theme from the Invader" so you could hear the little digital critters inexorably make their way to the bottom. To be honest, there isn't a whole lot of difference between the two tracks but they do make some audio bookends of a sort. Plus, I reminisce about that time during the trip when all of us decided to play at the game kissa across from McDonalds near the Prince while drinking down our super-sweet iced coffees.


The end of Side B on the original Japanese album was "Acrobat" by Hosono who decided to add that synthesized music of a carnival to the game bleeps and bloops.


"Bridge Over Troubled Music" was the initial reason that I had wanted to create this article tonight. Coming between "La Femme Chinoise" and "Mad Pierrot", it acts as that nice little musical doodle seemingly to get everyone back from intermission and into seats again. I have some regrets that I didn't introduce "Bridge Over Trouble Music" in the article for "Mad Pierrot" since the transition is seamless.


However, I did find this video uploaded by Nobuo STUDIO with Nobuo himself providing a great version of "Bridge Over Trouble Music" and "Mad Pierrot".

As for my initial concerns about what I had purchased, when I got home from Japan and played both sides of "Yellow Magic Orchestra", I quickly relaxed. There was no need to worry about YMO anymore, and of course, the guys would continue to come out with some great technopop over the next few years.
Posted by J-Canuck at 9:43 PM