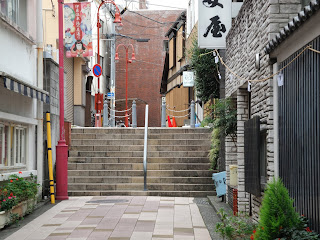 Having watched Japanese comedy over the years, I've known and enjoyed acts such as The Drifters（ザ・ドリフターズ）, Tunnels（とんねるず）and Kuniko Yamada（山田邦子）. Ironically, though, I never got to know Kin'ichi Hagimoto（萩本欽一）quite as well although he seems to occupy the status of a grand marshal of variety shows and comedy. I recollect that I did catch a few episodes of his long-running show "Kin Don!"（欽ドン!）which also featured 3 comics who would become Imo Kin Trio（イモ欽トリオ）and spawn a novelty technopop hit "High School Lullaby".


Being such a famous figure on Japanese TV, Hagimoto had a lot of programs on the air over many decades, and on one of them, there was a recurring skit which featured a soba shop and its sassy proprietress, Tami-chan, played by former aidoru Tamiko Nosaki（野咲たみこ）. Apparently, the skit was so successful that it either got spun off or the TV Asahi show itself was refitted to become "Tami-chan"（たみちゃん）. The show had a weekly run on Tuesday nights for the better part of a year from June 1984 to March 1985.


Now, the reason that I mention all this is that the ending theme "Kimi ga No ni Saku Bara nara" (If You are the Rose that Blooms in the Field) is sung by Akiko Wada（和田アキ子）. And for those who know the veteran singer/actress/tarento, she's known for singing a lot of soulful numbers with that boomer voice of hers. With "Kimi ga No ni Saku Bara nara", though, her delivery is as congenial and soft as lamb wool. And color me nostalgic, but I certainly don't hear ballads as countryside warming as this one anymore. Plus, I am a sucker for those shimmering strings. Toyohisa Araki and Takashi Taka（荒木とよひさ・三木たかし）took care of words and music respectively for her 42nd single from September 1984.
Posted by J-Canuck at 10:53 PM