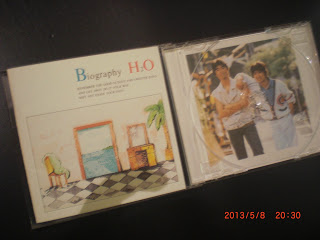 It's not all that easy to find songs online by the 70s/80s duo H2O that aren't titled "Omoide ga Ippai"（思い出がいっぱい）or have something to do with the anime "Miyuki"（みゆき）. Moreover, it's perhaps even rarer to find an H2O song that is performed totally in English.


Well, I did find such a song that fulfills both conditions by the duo of Kenji Nakazawa（中沢賢司）and Masaki Akashio（赤塩正樹）. This would be "Tonight", a track from their very first studio album "Water Land" (the album also includes the song, the laidback "Lorelei") which was released in May 1981. Unlike the mellow beauty of "Omoide ga Ippai" which has become a standard number for Japanese graduating ceremonies, "Tonight" is an English-language song, with Akashio on lyrics and Nakazawa on music, that has that rollicking beat of City Pop/J-AOR. Perhaps it was a fair staple on car radios at the time.

Perhaps in the early part of their career back in the 1970s, H2O may have been known as a folk/New Music duo, but I think the pair could also do City Pop right. As I said, pop the old tape into the cassette slot in a convertible and take a ride down the highway while listening to this slice of disco-pop. Some nice guitar and strings in the arrangement as well.
Posted by J-Canuck at 3:33 PM