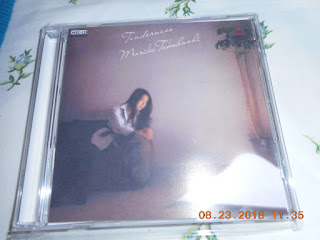 My last entry for Mariko Takahashi（高橋真梨子）was for her 3rd album "Monologue" back in May this year, so I guess there is some logic in getting her 4th album "Tenderness" (March 1981) and talking about this one as well. I've already actually written about the final track from "Tenderness", "Tasogare no Machi kara"（黄昏の街から）which gave me further impetus to track down the album.

As was the case with "Monologue", tracking down any Takahashi videos on YouTube outside of her biggest hits still remains as elusive as finding the Loch Ness monster, so as I did with "Tasogare no Machi kara", I've left the link to the iTunes page with the excerpts from "Tenderness". I emphasized on the title line that this is an album since there is also an individual song titled "Tenderness" that Takahashi has sung but has no connection with her 4th album and is actually a track on her 1992 release "Lady Coast". I think that I will probably cover that song next in the Takahashi file.

Anyways, I will begin things with the first track "Ai no Rufuran"（愛のルフラン）which was written by Takashi Matsumoto（松本隆）and composed by French pianist Pierre Porte. At first, I was rather curious about rufuran but one visit to jisho.org revealed that it is merely the Japanese version of refrain so I can now translate it as "Refrain of Love". Porte seems to have understood the Takahashi style of music with this gentle tune. It fits in with her early balladry that often takes things into American country-pop. Very relaxing.

Track 3 is "The Time to Say Goodbye" which takes things into a jazzier direction which is a genre that Takahashi also knows and sings very well. It's a very afternoon cocktail-friendly sort of number which brings to mind the works of vocal groups Circus（サーカス）and Hi-Fi Set（ハイ・ファイ・セット）and individual singers such as Ruiko Kurahashi（倉橋ルイ子）. Takahashi's husband, guitarist/keyboardist Henry Hirose（ヘンリー広瀬）, provided the gently swinging music while Machiko Ryu（竜真知子）came up with the lyrics.

City Pop has been another genre that Takahashi has dabbled in and that's represented with Track 4, "Moesashi"（燃えさし...Embers）. As she sings about the aftermath of a relationship that has burned away, I can hear those keyboards and bass hinting at the hot city streets and hotels, and yet there is a certain airiness provided by one of the keyboards that provides a helicopter view of the grand metropolis. Kazuko Kobayashi and Kingo Hamada（小林和子・浜田金吾）took care of this one.

Track 7 is an even more genteel jazzy number titled "Tea For Memory" provided by primo songwriters Etsuko Kisugi and Takao Kisugi（来生えつこ・来生たかお）. The piano simply provides that relaxing and undulating feeling of being out on the balcony in the backyard of some well-tended mansion in the Hamptons while Cary and Katherine are playing tennis nearby.

My last song for the evening is "Good Morning to Love" which once again takes things outside of the city although not as far out as "Ai no Rufuran" would suggest. This one seems to be out around the satellite towns since among the relaxed arrangements, there is still some of that AOR thrown in there. I did mention Hi-Fi Set before and one of the members of that trio, Shigeru Okawa（大川茂）, was responsible for the lyrics while Tetsuji Hayashi（林哲司）, a composer who knows his way around mellowness, provided the music here.

And once again, the commonality weaving through all of the tracks is Ms. Takahashi's great sultry voice. I am so glad that I was introduced to her so early in my interest in Japanese popular music. I had to constantly remember when I was playing the tracks from iTunes that I was only getting an excerpt from each of them. I'm also happy that I finally was able to acquire "Tenderness" since it finally completes my collection of her first ten albums, although I have a few more beyond the early years.

Great voice, great songwriters and great pop. What more can I ask for?
Posted by J-Canuck at 10:00 PM