Yuko Ohtaki -- Want You Back Again 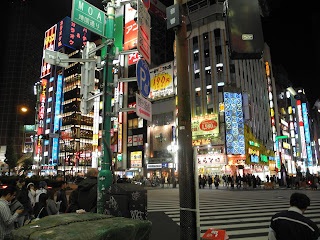 Bright lights and big city of Shinjuku. I gather that as the Olympics draw near, there will be increased interest in this particular area of Tokyo. Folks can try the huge variety of entertainment facilities of East Shinjuku or take a walk underneath the skyscrapers of West Shinjuku or the newer shopping complexes of South Shinjuku.


Indeed, it's a Friday night so some more City Pop. For some reason, whenever I think of some of the urban contemporary stuff from the 1980s, Shinjuku is the place that comes to mind, especially West Shinjuku with those soaring towers. It could be because of the coolness in terms of appearance put together with the coolness of the songs.

When I first heard "Want You Back Again" by Yuko Ohtaki（大滝裕子）, I had assumed that it was another contribution by her to the anime "City Hunter", as was the case with "Mr. Private Eye". But actually, this time, this particular downtown number has to do with another show about cool guys, namely the live-action police series "Abunai Deka"（あぶない刑事）. Good ol' synths of yesteryear, the horns and the light but resonant tones of Ms. Ohtaki make it feel like I'm riding shotgun with Detectives Takayama and Oshita, although their jurisdiction is Yokohama; sunglasses-at-night sold separately.

Tommy Snyder came up with the English lyrics while Ichinen Miura（三浦一年）took care of the melody. The song appeared on the 1986 soundtrack for "Abunai Deka".
Posted by J-Canuck at 7:42 PM