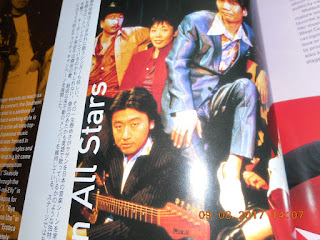 Wow! It's hard to believe that it's been a little over 40 years (yes, you read that correctly) since Southern All Stars（サザンオールスターズ）released their debut single "Katte ni Sinbad"（勝手にシンドバッド）back in June 1978. I'm not sure how folks initially took to the band led by Keisuke Kuwata（桑田佳祐）. My impression is that Kuwata and his crew have always been the slightly dangerous and freewheeling musical presence that sometimes have had NHK's collective knickers tied up in knots, so it's possible that citizens who were probably even more conservative back then were in quite the uproar.


Of course, since then, Southern All Stars have become one of the premier go-to bands for all things summery (along with TUBE) and the outfit that will usually give more than one's money worth in terms of entertainment.

SAS showed up on "Uta Kon"（うたコン）last night to spearhead the theme of summer kayo, and of course, to plug their latest single and their second single to be available only on digital download, "Sounen JUMP" (Prime of Life Jump). Coming out on July 23rd, the song written and composed by Kuwata seems to be about a man's love for his singing idols over the decades ranging from Pink Lady to AKB48.


Somewhat mellower than the usual uptempo Southern All Stars summertime fun, I think "Sounen JUMP" also hints at a look-back over the last 40 years of SAS craziness. I guess one pattern that I've managed to come up with when it comes to a number of Kuwata tunes, either as a solo artist or as part of the band is that an SAS song is not just catchy but also quirky with some naughtiness included. The backup vocals for "Sounen JUMP" catch me in an odd but fun way as if the band knows that this will make for a great karaoke singalong tune especially when the year-end parties start up. The naughty part, and I remember reading and incorporating this into one of the other articles on "Kayo Kyoku Plus" for either Kuwata or Southern All Stars, is something of a Kuwata tradition since he feels that a song should always have some sex in there. For "Sounen JUMP", just pay attention to the last minute of the official music video above and view the innuendo in all its glory.

It's been less than a fortnight since "Sounen JUMP" was released but so far it's reached No. 4 on Oricon Digital, and it is on Southern All Stars' latest BEST album "Umi no Oh, Yeah!!" (海のOh, Yeah!!...I'm pretty sure that it will hit No. 1) which came out today. Wanna bet that the band may be invited back to the Kohaku Utagassen later this year?