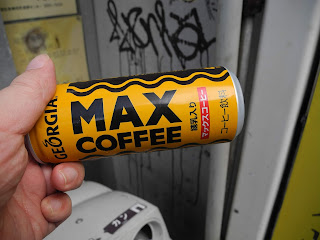 When it comes to happy little times, one of them that I especially treasured while I was living in Japan was the above: a can or a bottle of Max Coffee. For those who may not have ever encountered this drink by the Georgia Corporation, this is liquid coffee sugar. One of my oldest friends used to put in nine...count 'em, nine...teaspoons of sugar into his cup of coffee back at university. Max Coffee rather represents my buddy's past folly. Coffee connoisseurs and diabetics will not want to get anywhere near this toxicity in a can.

However during the blazing summer with all of its heat and humidity, this was one of my go-to drinks. I bought the can from the ubiquitous vending machines or I got the 2L bottle from the neighbourhood conbini. And yes, it did indeed go down good. In fact, whenever I visit my old stomping grounds, I make the effort to have one can of Max Coffee.


Speaking of happy little times, I did encounter this pleasant song by R&B singer akiko titled "Happy Little Time (hlt)" which was her 2nd single released in March 1996. It's got that sunny Sunday soul in there.


There is one line in the refrain in "Happy Little Time" (aishiteru) that sparked an engram of memory. As it turns out, the song was used for a shampoo commercial that must have gotten a lot of airplay since that one lick in the tune managed to hibernate all these years in my brain.

According to her J-Wiki file, akiko debuted in 1995 after apparently making an appearance behind the mike during Amateur Night at Manhattan's famed Apollo Theatre the previous year. Perhaps there was a Japanese scout there? There are 4 albums and 3 singles in her discography, although as of 2009, there has been no more known activity from her.
Posted by J-Canuck at 8:45 PM

Email ThisBlogThis!Share to TwitterShare to FacebookShare to Pinterest
Labels: 1996, akiko, J-R and B, Single