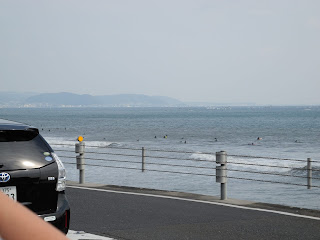 It doesn't happen all that often during my anime buddy's sessions, but once in a while, one or two anime kinda end up not being all that great. So what happens is that my friend simply ditches it out of the schedule after giving me a heads-up. That was the case with "Last Period" which kinda petered out (although I still like the theme songs), and perhaps might be the case with "Uchuu Senkan Tiramisu"（宇宙戦艦ティラミス）.

Then, as might be the case with any television broadcaster who has to deal with a cancelled series, my friend sometimes looks for a replacement. When I was talking with him earlier this week, he was rather gushing about this Summer 2018 anime called "Grand Blue"（ぐらんぶる）.

Spring 2018 had "Amanchu! Advance"（あまんちゅ！～あどばんす～）, the oh-so-mellow sequel to the original series of high school girls finding friendship and serenity through diving somewhere along the Izu Peninsula. Things became downright fantastical, especially in the latter half of the series this time around. Basically, that particular part of Japan was a magical place.

But then, just down the shoreline...

"Grand Blue" also has the setting of the Izu Peninsula, but this time it's a bunch of guys who nominally like diving like fish but really like drinking like fish. It's apparently as raunchy as much as "Amanchu!" is comforting. Teko from the latter show would probably faint at these guys' antics while Pikari could jump right in. And some slang has erupted from "Grand Blue" from what I've seen from the YouTube comments, such as water and oolong tea for something far more potent.


I will be seeing the comedy "Grand Blue" for the first time later this weekend, but I'm already enjoying the opening theme song by reggae band Shonan no Kaze（湘南乃風）, "Grand Blue".

This would be the type of summery song that would have the college folks running down the coastline with every sense of abandon. It's all about sweating, swimming, sunning and squeezing every little bit of enjoyment out of the hot season before the leaves start turning.

Shonan no Kaze also took care of words and music for "Grand Blue". The band consists of Red Rice, Wakadanna, Shock Eye and Han-Kun, and they first got together in 2001 with former member Goki. They've released 19 singles and 7 original albums since going major in 2003. Their best known song, according to Wikipedia, is "Junrenka"（純恋歌...Pure Love Song） from 2006 which I will have to also check out soon.

In any case, like some of the newbies in "Grand Blue", back in my university days, I treated a whole mess of screwdrivers and creamsicles (the cocktail variety) during a barhopping Xmas party like water, and paid for my folly dearly. Treat alcohol with respect, kids!
Posted by J-Canuck at 8:10 PM