NORMAL BLOGGING HAS BEEN INTERRUPTED FOR THIS EMERGENCY ANNOUNCEMENT!! OVER THIS PAST WEEKEND, THERE HAVE BEEN REPORTS OF SUDDEN AND POTENTIALLY FATAL SACCHARINE OVERLOAD ON YOUTUBE. VIEWERS ARE REQUESTED TO REMAIN CALM AND AVOID REPEATED EXPOSURE TO THE ABOVE VIDEO. FURTHER DETAILS WILL BE REPORTED AS THEY BECOME AVAILABLE. WE NOW RETURN TO YOUR NORMAL BLOGGING...

Yup, when the opportunity presents itself, I do like to lay it on rather thick. A certain part of YouTube probably did implode from sugar shock over the past few days when the 2nd series of the anime "Gochuumon wa Usagi desu ka?" （ご注文はうさぎですか?...Is The Order A Rabbit?）premiered. To be specific, the culprit is the ending theme by the three voice actors who make up Chimame Tai（チマメ隊）, "Tokimeki Poporon" (Palpitating Poporon). I've got no idea what "poporon" is, by the way.

"Earworm" doesn't even begin to explain this musical invasion of the isles of Langerhans (Google it).  Written by the same duo, Uran and Tomotaka Ohsumi（うらん・大隅知宇）, who had come up with the special ending theme for the finale of Season 1 of the show, "Nichijo Decoration"（日常デコレーション）, I had thought that the normal ending theme "Poppin' Jump"（ぽっぴんジャンプ）was moe than enough, but then I saw the upload of the ending credits for Season 2. And now Chimame Tai has added one of the cutest examples of ending animated dancing that I've ever seen. To paraphrase TV Tropes, the sweetness has been weaponized to the level of getting the CDC's attention.

And I have yet to see a single second of the season premiere although that will be coming this weekend when I meet up with my anime buddy. Plus, the actual full version won't be released probably for at least several weeks...unless the GochiUsa fans in Japan start banging on the doors of animation studios White Fox and Kinema Citrus with pitchforks and torches in hand.


To finish off, the crazy thing for me is that the refrain sounds somewhat like "All By Myself" by Eric Carmen. Maybe someday, some enterprising uploader will create a merging of the two songs. 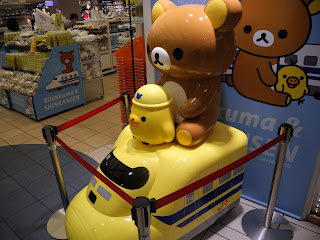