This week's "Kayo Concert" episode turned out better than I had expected. Although were a number of familiar faces and it being the first time seeing Junichi Inagaki (稲垣潤一) on the tube, I was afraid of getting bored as, after looking at the song line-up for the day, I knew only one or two of the old kayo that were to be sung during most of the show. But thankfully, all the tunes were rather easy to on the ears, and I even took a liking to one of them, that being "Kanashikute Yarikirenai".

Kouhei Fukuda (福田こうへい) and Motohiro Hata (秦基博) were the ones who took on this folk song. I didn't catch the MC's introduction at all, mostly because I was trying to read the name of the original singers at the top left-hand corner of the TV. Unfortunately it disappeared before I could even figure it out - I'm still slow at reading katakana - and I was left wondering who had first sung it. I know what you're thinking, I could have easily checked it out on my phone at that time, but it wasn't a pressing need to do so and it could wait. Though I thought that there was a slight possibility that "Kanashikute Yarikirenai" was a Group Sounds band's single as the name was in katakana, and from my knowledge, Group Sounds bands always have lots of katakana in them.

As for the song itself, I accepted it the moment I heard it. It's slow and gentle and also quite forlorn, but I really enjoyed its melody. It makes me think of a downcast person shuffling down the street with hands tucked in his pockets and head hung low, and occasionally he'd look up to the night sky, as if looking for answers or just to give himself some solace from whatever that's bugging him... Wow, that is actually quite a sad image.

Anyway, I did look up "Kanashikute Yarikirenai" afterwards, and that was when I found out that this was one of the works of a folk band I had heard of via this blog, The Folk Crusaders.The original had more of the acoustic guitar in it, making it sound more folk-sy and gritty than what was presented to me on "Kayo Concert", but it was still good. Kind of sounds like something people sing around campfires. The music I like so much was composed by one of the band's former members, the late Kazuhiko Kato (加藤和彦), and poet Hachiro Sato (サトウハチロー) was responsible for the lyrics.

"Kanashikute Yarikirenai" was The Folk Crusaders' 3rd single - their 2nd single after they got back together after a short hiatus - released on 21st March 1968. There's no record of how well the song did, but I'm guessing that it might have been quite successful back in the day.

That thing Kato was playing looks and sounds like the Okinawan version of the shamisen.

The video here has Kato performing with Konosuke Sakazaki (坂崎幸之助) from THE ALFEE (no wonder he looked familiar!). Sakazaki became part of The Folk Crusaders in the early 2000's after the band's second, and long hiatus.

Note: You can also look at the cover by Kotringo（コトリンゴ）for the 2016 movie "Kono Sekai no Katasumi ni"（この世界の片隅に）. 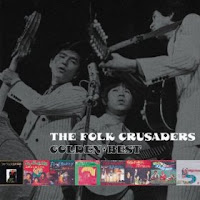 amazon.co.jp
Posted by Noelle Tham at 9:57 AM