While watching the dramas from the early 90's, more specifically "101st Marriage Proposal", I got curious as to how the actors, most of whom were in their twenties and thirties then, look like now. A couple of them looked more or less the same, and some looked better, like Yosuke Eguchi (江口洋介) who had gotten rid of his weird long hair. However, I don't think I can say that for Riki Takeuchi (竹内力). Not that he looks like what the cat dragged in or anything like that, but his remarkable transformation from a cute guy with puppy dog eyes and a little dimpled smile, to what looks like a combination of later-day-Elvis, a tanned snarling pro wrestler, and a yakuza boss had me doing a double take. Even my parents weren't convinced that it was him when I showed them current-day photos of the actor. Well, that allows Takeuchi to come in second or third for most shocking transformations I've seen so far in the Japanese entertainment world. If you're wondering, first place goes to none other than dear Kenji Sawada (沢田研二)... Oh Julie, Julie, Julie...

Anyway, I did another double take when I was browsing YouTube for some "new" (recent ones, or those I haven't yet discovered) enka songs when I came across one by Takeuchi. Up till that point, I didn't know about his singing career, and even if I did know about it, he didn't cross me as one who sings enka, so I had to check it out. Turns out that "Sakura no Yo ni" was Takeuchi's debut single as an enka singer; it was released on 16th September 2015, and it's been doing fairly well on the enka-yo charts, staying at 15th place for the past couple of weeks - I can't believe I completely overlooked it while running through the list during that period of time.

From what I read in the description of the MV, "Sakura no Yo ni" is a song that Takeuchi dedicated to his deceased friend. His lyrics are quite poignant, with RIKI expressing how much he misses the time spent with his buddy. Helping him in putting this song together were George Yamamoto (山本譲二) and his best pal Ikuzo Yoshi (吉幾三). While Yamamoto produced it, Yoshi was responsible for composing this song, which is not surprising as the gruff singer is known for churning out the heartfelt/heart-wrenching stuff - the organ bit at the start really makes "Sakura no Yo ni" sound like an elegy being said at this person's funeral. 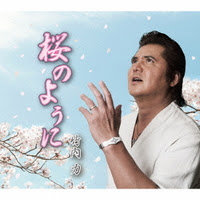 Remember when I mentioned that I thought Takeuchi looked like a pro wrestler and a yakuza boss? Apparently he acted in a number of action and yakuza flicks, and was involved in pro wrestling for a while, where he played as some baddie called King RIKI. Well then, I guess I wasn't too far off after all.