I don't think I had ever come seen an anime with as many hook-happy songs as "Space Dandy"（スペース☆ダンディ）. There is the funkadelic opening theme "Viva Namida"（ビバナミダ）and the surprising and delightful tribute to all things Tatsuro Yamashita（山下達郎）,"Hoshikuzu no Pipeline"（星屑のパイプライン）which popped up in Episode 6 of Season 1, and those were merely two of the tunes. So, I guess it couldn't have been any surprise to have Dandy himself get in on the act by unleashing some of that musical talent.

He did get involved in that "Glee"/"High School Musical" episode in Season 2 (and I will probably cover one of the songs in there soon enough) but tonight, here is his 80s rock tribute. Junichi Sawabe（諏訪部順一）, the seiyuu for Dandy, channeled his inner BOOWY to sing out "Kanchigai Lonely Night" (Misunderstood Lonely Night) in one of the later episodes of that same season. In that show, Dandy got together with his friend/rival Johnny (voiced by Hiroshi 'Penguin' Kamiya/ 神谷浩史) to form DROPKIX which got to go full stadium with some unintended pyrotechnics. And if I remember the concert correctly, I think "Kanchigai Lonely Night" ended up the only song on the playlist which got performed over and over again, much to the audience's growing chagrin and rage. I don't think even The Rolling Stones would be able to get away with sort of stuff even if it is "Satisfaction".


Here is the English version above. The original version was written and composed by Shutoku Mukai（向井秀徳）, lead vocalist/guitarist for the rock band Zazen Boys. Come to think of it, I think that guitar in there also had me thinking about The Police. 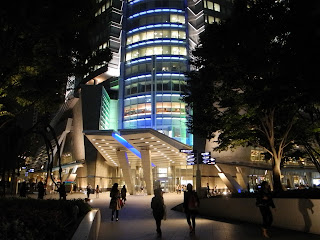