Aw man, last night, or should I say this morning, was one heck of a ride for yours truly and I doubt I'd forget it. After what seemed like an eternity of missed opportunities and disappointments on the part of some of my classmates, I was finally, as they would say, "steady" to head to a nightclub - as in, I was all for it. This caused much surprise and ecstasy in them as I'm usually one of the somewhat straight-laced or serious students in my cohort, so to get the chance to see me come out from my shell was like some sort of rarity.

The night began with two handfuls of us having some drinks courtesy of a couple of those raring to go so as to loosen up before heading to Zouk (popular clubbing haunt for people my age), and by drinks I mean a cocktail of peach flavored Absolut Vodka and Sprite on the rocks. Thus far, it was the strongest alcoholic beverage that has entered my system, having an alcohol content of a burning 40%. It wasn't bad and was actually pretty good when not taken straight, but unfortunately that gave me the illusion that I could hold it up without much problem. By my second small plastic cup, I was giggling uncontrollably. By a few rounds of drinking games which I constantly lost, I was having trouble concentrating - took some sips from the third cup though. By the time we were to leave for Zouk, I was sloshed. It was my first time being so drunk and frankly it was quite frightening - jelly legs, blurry vision, and skyrocketing heart rate. Luckily the bunch of friends I was with were patient and understanding and waited for me to regain my composure; they even got me a bottle of water to get the alcohol out of my system. So eventually I was well enough to join them at the club, albeit being a little tipsy. Ah... After this experience I think I'll stay off the hard stuff for a while.

Continuing on the topic of drunkenness, the here's a song that involves being under the influence, "Yopparachatta", which basically means something like "I am/got drunk". Originally sung by Miyuki Utsumi (内海美幸), a singer who has dabbled in enka, folk and pop (kayokyoku?), I recall hearing it from time to time on "Kayo Concert" by a variety of enka guests. It's one jaunty and funky tune, and combined with Utsumi's delivery, it seems to represent someone in that alcohol high state either stumbling about the streets and chuckling at everything, or ready to indulge in more drinks. But as much as I would like to think that "Yopparachatta" mirrors part of my personal experience, I realise that it's not the case when the lyrics come in. From what I understand, the woman of interest here is trying to drink away her sorrow and forget about the fellow who was not meant to be. For me, I was just drinking for fun and to see how much I could take - still not very much though.

"Yopparachatta" was Utsumi's biggest and most well-known hit from 1982, selling around 300 000 copies. I suppose that's what happens when two renowned songwriters come together to put together a song - Kazuya Senke (千家和也) for the lyrics, Keisuke Hama (浜圭介) for the music. It's apparently a track that karaoke-goers love. I can see why though; picking up the karaoke mic after a few drinks, the fun-sounding "Yopparachatta" is the perfect choice.

As its one of those classic kayo (sounds like it), a number of singers have had their own renditions of "Yopparachatta", most notably Ryuko Mizuta (水田竜子) with her version being released in 2001. It's equally funky, but has a Latin flavour to it. I think I'm more a fan of the original.

(cover of the Mizuta version)

While recovering from my drunken stupor, I overheard a friend of mine sharing his first experience of being heavily intoxicated. The silliest thing was that he laughed at a bowl of noodles he was eating. What was your most memorable drinking experience? 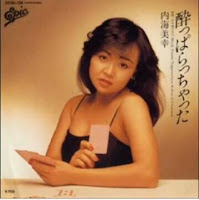