I actually have already brought in Yoko Ishida（石田よう子）into the annals of this blog via her cover of "Sugar Baby Love" for another anime but this is the article for her "official welcome" of sorts since I will always think of this particular song when it comes to the anison singer. Commenter Edu P.R. sparked me into finally putting up "Otome no Policy" (Policy of a Young Lady) for which I'm thankful.

It was also surprising to find out that "Otome no Policy" has the distinction of being Ishida's debut single from March 1993. I've been hearing her songs from time to time and seeing her name in the opening/closing credits of anime for some time now but never realized that she started from the franchise of "Sailor Moon"（セーラームーン）.

Of course, when it comes to the music of "Sailor Moon", there is that iconic tango of an anison "Moonlight Densetsu"（ムーンライト伝説）which started each episode in the early years of the original series but frankly, I wasn't all that enthused about the first couple of ending themes. Then, when the second season of the show "Bishoujo Senshi Sailor Moon R"（美少女戦士セーラームーンR）premiered fresh after literally resurrecting Usagi and the rest of the gang from evil, there came the new ending credits with the refreshingly down-to-earth images of Meatball Head just walking then running down the street. All this was accompanied by this cheerful and catchy song which became the first ending theme from "Sailor Moon" that I enjoyed.


The song was created by Rui Serizawa and Makoto Nagai（芹沢類・永井誠）, and the lyrics were pretty much the policy of Usagi Tsukino:

I will never ever give up no matter how hard it becomes
That's right! That is the sweet policy of a young lady

Yup, she's the one...Sailor Moon. Mind you, Sailor Mars would probably snark off something under her breath, and of course, Moon would somehow be able to hear it, leading to a mass punch-up. By the way, "Otome no Policy" managed to peak at No. 77 on Oricon and sold around 300,000 copies.

Huge anime fan and singer Shoko Nakagawa（中川翔子）covered the song in her 2007 album "Shokotan ☆ Cover - Anison ni Koi wo Shite."（しょこたん☆かばー 〜アニソンに恋をして。〜...Shokotan Covers - Fall In Love With Anison）That album went as high as No. 17 on the Oricon weeklies. Apparently her fans really wanted her to cover a "Sailor Moon" song.


And even Seiko Matsuda's（松田聖子）daughter, Sayaka Kanda（神田沙也加）, sang a brief but very sweet excerpt from "Otome no Policy" for a snack commercial. Excuse me...I've got something in my eye.

To finish off, "Otome no Policy" isn't the only "Sailor Moon" ending theme I've liked. There is a later tune with a different beat which has been just as fun. 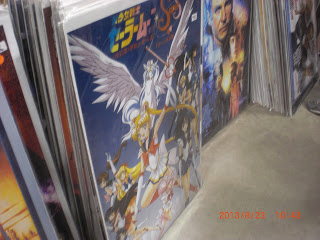 P.S. I haven't been able to see the new "Sailor Moon" and my anime buddy hasn't exactly been too enthused about viewing it. Apparently, although it may have quite the lineup in seiyuu including the original Sailor Moon herself, Kotono Mitsuishi（三石琴乃）, it's been said that the new series is lacking a lot of the humour that was the chief draw for me for the original series in the 90s. The above video was one of the biggest examples of hilarity...I don't think I've ever seen a gag involving sleeping feet anywhere like this.
Posted by J-Canuck at 9:17 PM