"Wagamama na Kataomoi" (A Selfish One-Sided Love) would be the usual Seiko Matsuda（松田聖子）aidoru song dealing with falling for that boy in school and getting nothing in return. However, it struck me as unusual due to the arrangements. I guess even Seiko-chan had her techno kayo moment way back when.

Originally released as the B-side to her 13th single "Tengoku no Kiss"（天国のキッス）which came out in April 1983, the lyrics are by Takashi Matsumoto（松本隆）and they do relate one girl's unrequited feelings for that guy. However, it is Haruomi Hosono（細野晴臣）behind the whimsical & goofy music and arrangements which sometimes have me thinking that the song is less a lovestruck tune than it is a theme for a childhood hero in the form of a dancing elephant, especially when it comes to that synth that sounds like a tuba. It's rather ironic since the A-side of "Tengoku no Kiss" which was also created by Matsumoto and Hosono is as far away from that techno kayo feeling as Hokkaido is from Okinawa. And that is why "Wagamama no Kataomoi" has implanted itself into my head all these years.

The song found itself on the album "Touch Me, Seiko" from March 1984. The album is a collection of all of her B-sides and has the distinction of being the very first such album to reach No. 1 on Oricon. 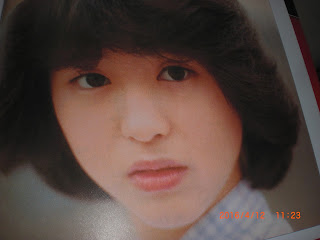