It was with great sadness that I was informed about Koji Wada’s (和田光司) death, a singer I’ve known, admired and respected since I was a thirteen years old teenager. He was battling against cancer for some years now, but couldn’t resist the horrid disease anymore. He passed away on April 3th, but it was only informed to the media a few days ago. Koji-san was 42 years old.

Koji Wada was well known worldwide for singing various songs from the Digimon (デジモン) anime series, in special all the opening themes. One of them, “The Biggest Dreamer” (you can hear its short version below), will all its sharp synths and catchy melody, was actually the first Japanese song I fell in love with, months before I met Megumi Hayashibara’s (林原めぐみ) works. In that sense, Koji-san was the first Japanese singer I ever liked.

In the past few weeks, Wada’s song I’ve been listening to a lot is “Seven”, which, besides having a somewhat upbeat arrangement, can become quite emotional when he sings the “oh seven... try to be free” line. And with the sudden news about his death, the way he sings this line has been resonating even more with me.

It also happened that a reworked version of “Seven” became his last official single, being released five days before his death. And this new version, with a more organic arrangement, was his true farewell to this world and to Digimon, the series which made him famous. Unfortunately, due to the cancer, his voice was never the same, but he kept recording, composing and performing while he could.

“Seven” was originally included as a coupling song in Koji Wada’s debut single, “Butter-Fly” (Digimon's first opening theme). The single was released in April 1999, reaching #47 on the Oricon charts. Lyrics and music were composed by Kohei Koyama (小山晃平), while the arrangement was done by Cheru Watanabe (渡部チェル). 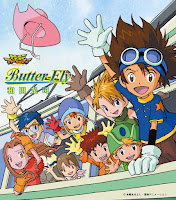