I was never quite sure about the GAP outfit that Minako Yoshida（吉田美奈子）was sporting for the cover for her 3rd album "Flapper" from March 1976 but I don't have much in the way of doubt when it comes to the music that she was providing. I've been seeing her as the Queen of J-R&B and even as far back as the mid-1970s, Yoshida gave some good groove. 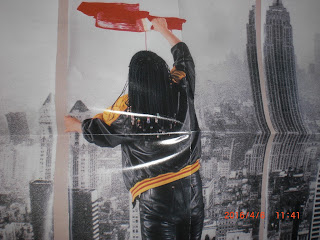 One example is the refreshing track "Asa wa Kimi ni" (The Morning to You) whose instruments start off representing waking up on a nice sunshine-y day in the city. I would love to have this playing on the stereo rising up on a good morning in a Toronto high-rise condo by Lake Ontario, but there is nothing wrong with my bedroom either since it does face east. Some nice musical orange juice, this is.

The amazing thing about this particular track is that most of it sounds as if it could have been created as recently as the early 2000s when Japanese R&B was really starting to get popular. I wonder what chanteuses such as bird and Misia can do with "Asa wa Kimi ni". Another wonderful part is how after Yoshida's lyrics and Hiroshi Sato's（佐藤博）music paint this lovely morning scene in the metropolis, the last several seconds go right into this harmonica-driven soul of getting down into the core street traffic. Just grab that coffee and croissant and run to work! I'm not certain whether that was Yoshida and Sato's intention with the arrangement but that's how I hear it.