First off, I hope that everyone in Kumamoto Prefecture is doing fine after that M6.4 earthquake in the area on Thursday night.


It hasn't been too busy a week in terms of work so I've been able to do some more digging into the record vaults, so to speak, and I was able to pull this one out by the master himself, the late Haruo Minami（三波春夫）the minyo-trained enka singer. The album is a 2-record set of 20 of his hits and listening to just even Record 1 had me realizing that a lot of them could have been chosen by fellow collaborator Noelle Tham herself!

Then I came across this song by Minami which was yet to have been placed into the blog. It's titled "Ippon Gatana Dohyo Iri" (One-Sword Enters The Ring) and just like a lot of his works, it's a Minami celebration based on a dramatic play of the same name originally created by novelist and playwright Shin Hasegawa（長谷川伸）about a struggling sumo wrestler named Mohei（茂兵衛）without friends or family who needs some sympathy and money, and finally gets both from a waitress in a bar-lined street. A decade later, Mohei ends up as a gambler and has a fateful re-encounter with that kind waitress...and some other not-so-kind fellows. The 1960 song was written by Masato Fujita（藤田まさと）and composed by Kazuo Harukawa（春川一夫）, and listening to it on the record, I could tell that this "Ippon Gatana Dohyo Iri" stressed more of the hero in anti-hero when it came to Mohei.


Now, if you noticed above the performance video of Minami in the last line, I stated "this 'Ippon Gatana Dohyo Iri'", and that is because, there are at least four different songs with that same exact title in existence in enka according to the J-Wiki article. I don't think I have ever come across a situation like this before on the blog so I've gone beyond the boundaries of that BEST album by Minami to find out about the other three. I think any drama that has been able to give birth to four different enka songs created by different songwriters must be highly respected indeed, and from what I could glean from the story as summarized on that J-Wiki article, the overarching themes are duty, charity and honour.

The first version of "Ippon Gatana Dohyo Iri" was actually released in 1957 and sung by Michiya Mihashi（三橋美智也）. Written by Kikutaro Takahashi（高橋掬太郎）and composed by Junichi Hosokawa（細川潤一）, just from first impressions, there is more of an elegiac and solemn feeling to this original version. Hiroshi Itsuki（五木ひろし）and Kiyoshi Hikawa（氷川きよし）have also covered this take as well.

Unfortunately, I couldn't find out when enka singer Yuriko Futaba（二葉百合子）sang her own version of "Ippon Gatana Dohyo Iri" but this one was written by Tetsuro Fujima（藤間哲郎）and composed by Seiichi Sakurada（桜田誠一）. Perhaps it might be my own ears but I think there is a softer feeling to this different song, although it seems as if Futaba is singing from the man's point of view.


Then in May 1992, "Ippon Gatana Dohyo Iri" was released in this form as Aya Shimazu's（島津亜矢）7th single. Out of the four versions, I think this one which is definitely told from Mohei's perspective is the most boisterous, especially with Shimazu taking on the wrestler's defiant voice. This was written by Kotoba Takatsuki（高月ことば）and composed by Ryosuke Murasawa（村沢良介）.

Since I've only just heard these four songs which all come across as The Ballad of Mohei, I can't really give much more insight than what I've written above. Perhaps with repeated listenings over the next little while will I be able to get some idea of any different angle of Hasegawa's classic tale. 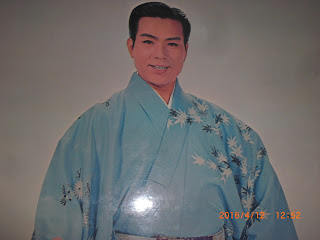