Gotta be honest here...the reason I put up this article here is that I had never heard any of Miyoko Yoshimoto's（芳本美代子）aidoru output until tonight. I've been curious since I used to see her pop up once in a while on Japanese variety TV and also there is the fact that I often saw her snaggle-toothed visage on many a Myojo or Heibon magazine. Seeing that quintessential photo of a yaeba grin on an 80s aidoru, I always thought that she was an orthodontist's dream project.

So, I went to the beginning. Here is the debut single for the Yamaguchi Prefecture-born singer "Shiroi Basket Shoes" (White Basketball Sneakers) which came out in March 1985. Written by Takashi Matsumoto（松本隆）and composed by Daisuke Inoue（井上大輔）, it's a pleasant enough tune about a high school girl falling for that handsome fellow in school...whether he is playing for the basketball team or not, I really don't know. And at least for this first song, Yoshimoto has that nice and light delivery.

Since those early days, the former aidoru has gotten that corrective work on her teeth...as did I on my own choppers in the same decade. 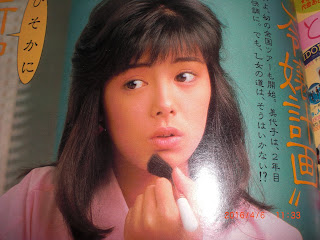