Thankfully we are all in springtime now and hopefully summer is just around the corner. Most Torontonians are often quite desperate for the hot season and even when the high temperatures are just in the teens, folks here are more than happy to walk around in shorts, flip-flops, shades and go windsurfing in Lake Ontario.

But of course, when it comes to summer in Japan, I always think of TUBE and Southern All Stars. So many of the latter band's tunes are so summery that while in Toronto our four seasons are known as spring, construction, autumn and ice hockey, in the land of my heritage and pop culture interests, the seasons are probably known as autumn, winter, spring and SAS. Another one of their hits from the hot season is the July 2003 release of "Namida no Umi de Dakaretai" (I Wanna Be Embraced in a Sea of Tears) which was Kuwata & Co's 47th single.

I remember this song especially because of how much it sounded like the fun-in-the-sun Southern All Stars of yore. Perhaps that feeling was further enhanced since my impression was that their megahit from 2000, "Tsunami" which was quite a serious and dramatic ballad to me still cast quite the shadow when it came to its fame. Plus there is the fact that the band went on a 3-year hiatus after that hit. "Namida no Umi de Dakaretai" brings nothing but summer on the beach again.

The Keisuke Kuwata（桑田佳祐）-created song was also noteworthy for the music video (unfortunately only a very short excerpt could be found below) which featured tarento/actress Eiko Koike（小池栄子）when she was still in her buxom gravure aidoru stage. Sad that she didn't pop up in the short version but at least I could still see the sunniness of it all even though most of it was greenscreened in. Another SAS tongue-in-cheek touch, no doubt.


However, the Southern All Stars touch was still very much golden. It hit No. 1 on Oricon, went Triple Platinum and even won Song of the Year honours at the Japan Golden Disc Awards. Finally, it became the 7th-ranked single for 2003, selling a little under 750,000 copies. 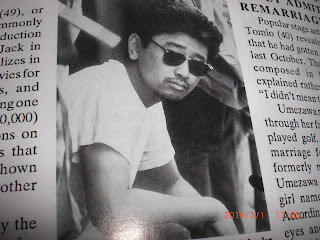