Less than an hour ago, I was watching the latest episode of NHK's "Nodo Jiman"（のど自慢）singing contest show which had guests in the form of SMAP and Fuyumi Sakamoto（坂本冬美）. One of the participants was a 75-year-old lady who wanted to sing a song in tribute to her recently departed husband who had sung the song to her.

The song was "Ginza Kankan Musume" from 1949 as originally sung by the late actress Hideko Takamine（高峰秀子）. When I listened to the lady's rendition and then the original, the old-fashioned boogie beat was front and centre, and I kinda realized where eclectic 90s band Jitterin Jinn got its inspiration. The song was created by Takao Saeki and Ryoichi Hattori（佐伯孝夫・服部良一）as the theme for the movie of the same name which starred Takamine. According to J-Wiki, by 1952, Takamine's single had sold about 420,000 records.

At first, I thought the meaning of the title was referring to can-can dancers performing in some Ginza nightclub, but according to the explanation in the J-Wiki article for the song, the kankan was actually a word derived by a movie director Kajiro Yamamoto（山本嘉次郎）, although he wasn't the one behind this particular movie (Koji Shima「島耕二」was the actual director). It was a play on words for panpan musume which referred to "unlicensed prostitutes". The kankan musume meant "short-tempered ladies" who had to somehow survive the immediate postwar years.

As for Takamine, she was born in 1924 in Hakodate, Hokkaido and entered show business as a child actor who gained so much fame that she was seen as the Japanese Shirley Temple. As she grew up, she started getting roles as tough-minded and hard-working women, Although she retired from acting in the late 1970s, she continued working as an essayist.


Being a kayo classic, "Ginza Kankan Musume" was covered by a number of singers including Hibari Misora（美空ひばり）. I'm uncertain when Misora's smooth and nimble version was originally recorded but it is on an album titled "Misora Hibari Cover Song Collection" from 2007 by Columbia Music Entertainment.

In 2001, Yosui Inoue（井上陽水）provided his own cover with a rock beat in his album, "United Cover". Leave it to Mr. O-genkides'ka to give a fresh perspective to an old chestnut. 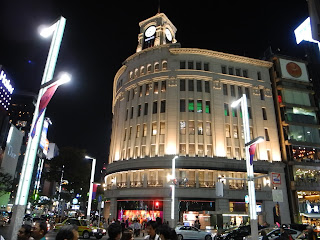