Akina Nakamori's（中森明菜）5th single, "Twilight - Yugure Dayori" (Dusk Message) from June 1983 was a ballad that I heard for the very first time after purchasing that BEST album from 1986 that I've talked about in an earlier article. By that time, I had already heard a number of Akina's rousing hits through videotapes of those 80s music shows, visits to Kuri, our old karaoke haunt here, and purchases of her LPs at Wah Yueh, and by 1986, she had already entered pop superstardom.

So it was interesting to hear this particularly sweet ballad on the very aidoru side from her early years. I think for anyone who had only known about Akina-chan's deep vocals from around the mid-80s, it must have been quite the revelation to listen to this high-pitched (and slightly off-tune at a few points) voice singing about a sad young lady sending a postcard to her beloved as the two are separated by circumstances.

Akina's first five singles of "Slow Motion", "Shojo A", "Second Love", "Nibun-no-Ichi no Shinwa" and then "Twilight" alternated between the cute love songs and the hell-raising pop-rockers, but it just seemed to me that "Twilight" had Akina go into power aidoru ballad mode. Although within her vast discography, this particular song wasn't in my Top 10 Akina list, it's still a ballad that I have some affection for since it was created by Takao and Etsuko Kisugi（来生たかお・えつこ）who were able to whip up some very tenderhearted nostalgic ballads with the epic strings.

"Twilight" managed to hit No. 2 on Oricon and later became the 19th-ranked song of the year. 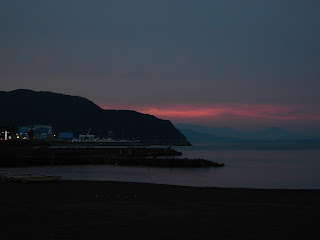