My first viewing of "Omoide no Melody" turned out better than expected as the songs I was looking forward were all well sung, though I must say that it felt like I was watching the Kohaku, only shorter and more bearable. I wasn't able to watch all two hours plus of the show as my brother was strongly insistent on wanting to watch his - I know big fans of the sport (like my brother) will get riled by this word - soccer match (BPL) that began half way through the "Omoide no Melody". I relented, but I was firm in telling him to switch back during the bits that I had to watch. That included Hiroshi Itsuki (五木ひろし) crooning "Yogiri yo Konya mo Arigato" (夜霧よ今夜も有難う) - yes, that is one of my favourite songs of all time. Despite my doubts, Itsuki did a fine job.

Anyway, one segment during the uninterrupted first half of the "Omoide no Melody" featured 3 stars from the 60's: bad boy actor Akira Kobayashi, rockabilly Masaaki Hirao, and enka powerhouse Saburo Kitajima. While the veterans each sang a requested song from their discographies, behind them stood black-and-white photos of themselves back then in their heyday, and boy, Kobayashi and Hirao were something to look at! Sorry Sabu-Chan. Speaking of Sabu-Chan, the tune he had in store was one of his first few hits, "Guitar Jingi".

I wasn't that game to listen to "Guitar Jingi" as the "Jingi" bit reminded me of Grandpa enka's later single "Kyodai Jingi" (兄弟仁義), and if the former were to be anything like the latter, I wouldn't like it as it's too slow and... well, boring. But upon hearing the more upbeat and elegant music, I became more agreeable with it... I ended up liking it - Mom couldn't have been any more unimpressed. She actually grumbled when I said that I fancied it. The score was composed by Minoru Endo (遠藤実), and it makes "Guitar Jingi" sound like a song that would have the words "Wataridori" in the title rather than "Guitar", especially when combined with Sabu-Chan in a kimono. The lyrics to "Guitar Jingi" were penned by Teppei Saga (嵯峨哲平).

"Guitar Jingi" was released in 1963, just a year after Sabu-Chan had made his debut. There is no write up on it on the J-Wiki, but seeing that it allowed Grandpa enka to perform on the Kohaku for the very first time, it must have been popular.

The video above has Aya Shimazu (島津亜矢) giving her muscular rendition of "Guitar Jingi". When it comes to songs like these, Aya-Chan is sure to put out a good performance with her clear and powerful vocals. 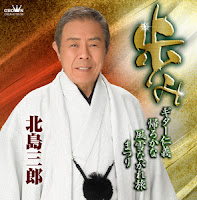 Kitajima was one of the emcees on the "Omoide no Melody", and I just loved it when he dragged some of the elderly singers and special guests off the stage!