Around the Yuletide, the usual spate of Xmas-themed movies come out on the telly, especially on the Turner Movie Classics channel. Of course, one of them is "It's A Wonderful Life" with Jimmy Stewart and Donna Reed which, try as I might, still gets me lumping up in the throat and tear ducts at the end. Of course, that entire last act of the movie when bumbling-but-good Clarence the Angel convinces suicidal George Bailey to see that he is needed in the world has become the most famous part and has been used in TV shows and perhaps other movies since 1946 to the point of hoariness.

However, there was one other scene in "It's A Wonderful Life" that also pops up to mind whenever I remember it. It was the one where a much younger George woos his future wife, Mary, by promising no less than the moon itself if she so desired it:

"What is it you want, Mary? What do you want? You want the moon? Just say the word and I'll throw a lasso around it and pull it down. Hey. That's a pretty good idea. I'll give you the moon, Mary." (copied from www.imdb.com)

It's also that particular scene which comes to mind whenever I think of Kazumasa Oda's（小田和正）21st single "Kira Kira" (Twinkle). His lyrics about enticing that special someone to come with him for a better life together had me thinking about good ol' George Bailey in Bedford Falls.

But "Kira Kira" was actually meant for the characters of Toko and Kotaro on the J-Drama "Koi no Chikara"（恋ノチカラ...The Power of Love）back in 2002. Both of them start out as folks down on their luck before meeting up again and trying to get some redemption with the usual snarky back-and-forth. And I think there is that musical feeling of positivity and the light at the end of the tunnel in Oda's melody right from the opening strings.

The single was released in February 2002. When it comes to Oda's contributions to theme songs for dramas, all directions will inevitably point to "Love Story wa Totsuzen ni"（ラブ・ストーリーは突然にー）, the theme tune for "Tokyo Love Story"（東京・ラブ・ストーリー）back in 1991. I mean, I still consider that particular song as Oda's magnum opus when it comes to his singles as a solo artist, but there is something that is also very attractive about "Kira Kira". With "Love Story wa Totsuzen ni", that single pluck of the guitar string in the first second launches the listener into the organized chaos that is Tokyo with the turbulence and excitement of metropolitan life and romance. "Kira Kira", on the other hand, has those strings taking us to a quieter and nicer neighbourhood away from the hustle and bustle. The neighbourhood may still be in Tokyo but it's now a decade later and perhaps the main characters from "Tokyo Love Story" are now settling into a more grounded bliss.

There is also something that is very comforting about listening to an Oda song. In a way, it's almost like listening to chamomile tea. Now I realize that there are J-Pop fans for whom Oda is not their cup of tea for the reason that I laid out in that first sentence, but to me, especially with some of his more uplifting songs such as "Kira Kira", I do finish that time listening to him feeling somewhat more buoyed for the experience.

"Kira Kira" got as high as No. 3 on Oricon, and compared to "Love Story wa Totsuzen ni", it finished the year somewhat more modestly at No. 33. Still, I cannot deny some of its more therapeutic effects. Perhaps, Oda might be acting like a Clarence here, too. 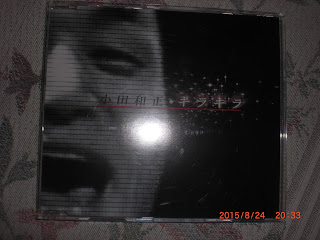