There's nothing like an early Seiko Matsuda（松田聖子）single to bring back memories of my first realization of my love for Showa Era Japanese pop. One of the commenters was asking about Seiko-chan's 3rd single, "Kaze wa Aki Iro" (Autumn-Coloured Winds) since this was the song that hooked him onto the discography of the evergreen aidoru of the early 1980s. And once again for me, this was a tune that I knew more for the melody than for the actual title.

Written by Yoshiko Miura（三浦徳子）and composed by Yuuichiro Oda（小田裕一郎）who took care of a lot of Seiko's early contributions as singles and album tracks, "Kaze wa Aki Iro", despite the title and its release date of October 1980, has that summery breeziness that I always associated with Seiko's early material. There is that introductory flourish by the strings before they crash into the aidoru's delivery and the happy-go-lucky melody. The song has that classically Japanese approach....being the melody guy, I used to assume that the tune was that really cheerful story of boy meets girl on the beach. However, Miura's lyrics were actually relating past happiness, current melancholy as the courtship didn't quite take. I think the title was a clue since the season of autumn has had that feeling of an ending to things, including all good ones.


"Kaze wa Aki Iro" hit No. 1 on the charts and stayed there for nearly a month. Despite its release in October 1980, it was so successful that it ended up as the 14th-ranked single of the year, and hung around for another year, ranking in at No. 65. It was also a track on Seiko's 2nd album, "North Wind" from December 1980 which also hit the top spot.

The very first record I got of Seiko Matsuda was her single "Komugi Iro no Mermaid"（小麦色のマーメイド）from 1982. However, the very first time I ever heard of the lady was through a commercial of some product with Seiko-chan singing "Natsu no Tobira"（夏の扉）...the ad featured quick stills of a laughing Seiko playing tennis on the courts. I just saw the ad so many times during my 1981 summer trip of epiphany through Japan that the song could have easily become the theme song for my adventure. Fresh, fresh, fresh indeed! Maybe you can find the ad in the video above. I would go through all of it but I'm on the lowest tier of Internet service here.

It's not quite autumn here yet but I think after this next spate of hot weather coming up, I will be looking forward to the colorful season with open arms. 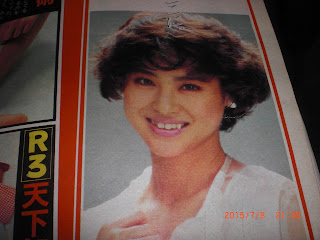