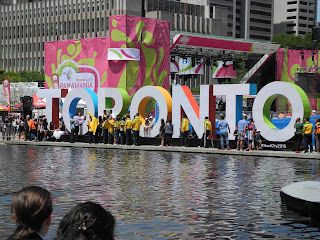 Well, the Pan American Games in Toronto wrapped up a week ago and the Parapan American Games are about to go in another week. A number of my fellow citizens in Toronto (including myself) didn't have all that great an opinion of the Games as they approached, but as it turned out, the Games ended up a success for Canada as they came in second only to the United States in the medal count. I didn't think we had it in us to do that well but I guess there is something to be said about home country advantage. Now, people are starting to get hyped about perhaps going for the 2024 Summer Olympics...whoa, now, let's take a breath here, shall we?


The Games here brought back a few memories going back some 24 years when Japan held The 1991 World Championships in Athletics in Tokyo (how those athletes managed to survive the heat and humidity in August is beyond me...I already hightailed it back to Canada after the JET Programme). I don't quite remember the television hype for those Games being as obnoxious as the commercials were for the Pan Am Games 2015. There was just this one ad where a high school girl ran up the steps of a deserted stadium and then yelled something defiant.

Meanwhile, there was soulful music playing in the background while the familiar throaty tones of Kahoru Kohiruimaki（小比類巻かほる）came over the speakers. "Time Goes By" was not only Kohhy's 17th single from March 1991 but it was also used as the image song for NTV's coverage of that athletic meet. Written by the singer and composed by frequent songwriting partner Yoshiaki Ohuchi（大内義昭）, "Time Goes By" is surprisingly quite moving; I hadn't heard it in some time and when I saw the video above, I actually had a couple of chills crawling up my back at the way the music just flowed, especially when the sax solo came in.

Of course, I did get my copy of the single before I left Japan.
Posted by J-Canuck at 1:46 PM