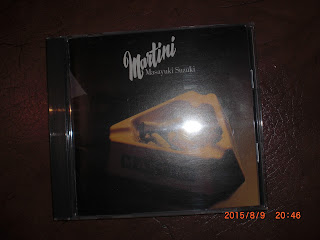 Another Sunday night is fast coming to a close and another work week is about to commence. Time to provide some relaxing Japanese R&B, and who better than the cool Masayuki Suzuki（鈴木雅之）? Martin gave me some nice old-fashioned soul to ponder with his 4th single from July 1988, "Guilty".

The husband-and-wife team of Tatsuro Yamashita and Mariya Takeuchi（山下達郎・竹内まりや）once again helped out Suzuki in the creation of this tune about that illicit affair in some mystery hotel in some downtown Japanese city. And along with those wonderful vocals by Suzuki, I just love the horn section which included the prolific Jake H. Concepcion on sax. Unfortunately, it didn't seem to chart on Oricon but it is on Martin's BEST album, "Martini" from 1991. Originally, the song was a track on his 2nd album from April 1988, "Radio Days" which managed to peak at No. 12 on the album charts.

As much as I like "Guilty", I have to say that I like the other Yamashita/Takeuchi/Suzuki collaboration, "Misty Mauve" even more.