It's quite rare for me to start watching an anime on a whim like that, but after getting a birthday gift for my anime-loving friend in the form of a little Nyanko-Sensei plushie a couple of weeks ago, I just had to check out the show this character comes from. The anime was titled "Natsume Yuujincho" (夏目友人帳... Natsume's book of friends) and what piqued my interest besides the adorable maneki neko was the horror aspect of the show - it featured Yokai, which are morally ambiguous ghosts, ghouls and monsters that are unseen by most humans but tangible to our protagonist Takashi Natsume. It was an ironic choice, I must add, as I'm very easily frightened and some of the designs of Yokai I've seen thus far (I'm currently at season 3), whether malevolent or benevolent, made my skin crawl. But it's quite an enjoyable show with many heartwarming, funny and down right creepy moments. There have been a handful of freaky jump-scares as well...

Anyway, as with most animes I watch, I tend to end up liking at least one song over its course. In this case, it's "Ano Hi Time Machine" (That day's time machine), which was the opening theme to the show's 2nd season, "Zoku Natsume Yuujincho" (続 夏目友人帳). Although the episodes were set in autumn and winter, "Ano Hi Time Machine" has a more summery vibe to it. That combined with the breezy vocals of sasaji, the leader of the former rock band LONG SHOT PARTY (disbanded in 2010), makes me think of someone relaxing under the shade of a large tree on a bright, clear day with the warm wind whisking by. What I like most about this tune is that it has the trumpets blaring away in the back that gives the song a feeling of jubilation, and the inclusion of the saxophone gives "Ano Hi Time Machine" its refined side.

"Ano Hi Time Machine" was written by sasaji himself and was composed by the entire band. It was LONG SHOT PARTY's 3rd official single, 5th if you count their first two indies singles, released on 28th January 2009. The song did decent on the Oricon charts, peaking at 38th place.


The opening sequence to "Zoku Natsume Yuujincho" was also quite interesting and was something I would watch rather than just skipping ahead to the show itself. In the first half, it showcased some shots of scenery and a few characters going about their daily lives, then in the later part, the same sequence was played again, but this time with the addition of the now visible (to the audience) Yokai doing their own thing as well beside the humans. And when you see this huge, wolf-like creature in there with red markings on its head, that's Nyanko-Sensei a.k.a Madara in his real form. 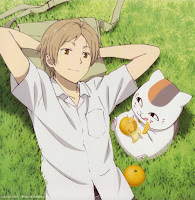 mery.jp
Posted by Noelle Tham at 2:15 AM