Since March this year, "Nippon no Uta" has become "Shin Nippon no Uta" (新・BS日本のうた). I haven't yet seen this new season as NHK is still showing episodes from the previous season, but from what I've been seeing from the lineups from the "Shin Nippon no Uta" webpage, besides the word "new" in the show's title, there are a number of changes to the Saturday music program. For starters (literally), there is no more "Meikyoku Eleven", it has been changed to... something else and the 11 songs have been reduced to 9, and the "Special Stage" pairs are now singing tunes that hardly, if ever, get any time in the sun. Some instances include Ikuzo Yoshi's (吉幾三) official debut single during his time as a budding aidoru in the 70's (I am not kidding), and George Yamamoto's (山本譲二) "Bokyo Shigure".

I chanced upon Yamamoto's "Bokyo Shigure" quite a while ago by accident when I was too late in changing to a different track as I was listening to my "George Yamamoto Playlist". It came immediately after the muscular "Yume Kaido" (夢街道), and what prevented me from switching to something else like "Oirase" (奥入瀬) was its dramatic music with a heavy atmosphere, brought to you by Hiroshi Madoka (円広志), that fits Yamamoto's cool and manly demeanor. Well, unfortunately what you hear in the video above is rather tame in comparison to the recorded version.

When Yamamoto first opens his mouth, "Bokyo Shigure" starts off as somewhat gentle as he mournfully murmurs the first few lines, as if he's voicing his pain of missing home to himself or the bartender handing him a glass of brandy on the rocks at a quiet drinking establishment. But at the chorus, the volume of both music and Yamamoto increases as he yells out in indecision - he desperately wants to return to his hometown, but bound by pride, which can be seen in the very last sentence of the song, "Ore wa otoko janai ka?" (Am I not a man?), he is obliged to stay. Reiji Mizuki (水木れいじ) penned the lyrics. 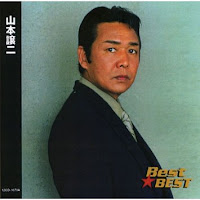 "Bokyo Shigure" was released on 21st September 1986 as Yamamoto's 19th single, and its actually one of my favourites as its got the enka singer's contrasting delivery at different parts of the song and the fierce score.