What I've come to like about Fuyumi Sakamoto (坂本冬美) is that she can be elegant and genteel, and at the same time able to pull off aggressive and macho songs with that voice of hers that can turn from mellow crooning to forceful growling at the drop of a hat, like when she sang Muchi's "Osho" (王将) during last year's "Osaka Melody". Not going to lie, I was expecting a manly man to sing it, but Sakamoto's rendition left me thoroughly impressed. That reminds me, I wonder if NHK will air another round of the "Osaka Melody" this year. If they are, I hope someone sings "Juso no Yoru" (十三の夜)!

Anyway, Sakamoto has got a couple of songs in her own repertoire that show off her tough side, for instance, "Otoko no Hi Matsuri" (Man's Fire Festival), which is also one of those festival-based enka I enjoy listening to. The thumping of the taiko, the electric guitar revving away, it's actually not far something that Takashi Hosokawa (細川たかし) would belt out, all that's missing is the shamisen. But there is still a feminine touch to this masculine tune, probably from the strings and the acoustic guitar. This was composed by singer-songwriter Masato Sugimoto (杉本真人).

As seen in the title, "Otoko no Hi Matsuri" centers around the Fire Festival, but as to which one of the many variations , I'm not too sure. Takashi Taka's (たかたかし) lyrics don't seem to give me a clear idea about the exact Fire Festival being sung about, so I wonder if he's just writing about the festivals that involve fire in general. A number of prefectures hold their own Fire Festivals at different times of the year, and prefectures can have more than one of these festivals. From what I've been seeing, they each have their own reasons for it, though something is bound to be set on fire, that's for sure, be it massive torches, wooden shrines with people on it - don't worry, I think those poor fellas get off the structure first before the others actually viciously burn it to the ground - or just trees.

All this talk about fire and things being set on fire brings back hilarious memories from my mildly dysfunctional Chinese language class from secondary 3/grade 9 where a classmate of mine's signature answer for every scenario imaginable was "It/he/she explodes/exploded." It got to the point where my teacher (who had remarkable patience and humour) banned him from saying the word explode, and so the classmate switched from "explode" to "catch fire". From then on everything was "on fire" or "caught fire". My teacher gave up. Ah, it was moments like these that made me forget about how much I hated learning the language. In fact, it actually made me do pretty well by the end of that year... and then I got dropped into the supposedly better Chinese class on the next year. Think of this situation like putting a minnow into pool filled with barracudas being ruled by a tiger shark. I was the unfortunate minnow. Quite terrible, I can tell you that.

Okay, coming back to the main topic, "Otoko no Hi Matsuri" was released as Sakamoto's 42nd single on 2nd October 2013, and apparently, it was her first single in 5 years that's an enka song. It did well on the regular Oricon charts, peaking at 31st position, and she sang it twice on her recent appearances on the Kohaku (2013 and 2014). I remember watching that performance on the Kohaku last year (it feels good to finally be able to say that!), and if my memory serves, she wore a pair of black high-heeled boots with a stylish red kimono. The first person that came to mind was Akina Nakamori (中森明菜) since she wore a similar-looking outfit when she sang "DESIRE" back in the 80's. 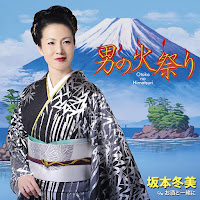