When I was just on the cusp of actually getting actively into music in the late 1970s, the world of Yellow Magic Orchestra knocked on my door with their melodic technopop and mesmerizing videos. So when I went with my graduating classmates on that 1981 summer trip to Japan, I knew that the one thing I had to get for myself was a YMO record or tape. What helped feed my hunger for the computerized music of Hosono, Takahashi and Sakamoto was when all of us visited the Toshiba Science Museum as part of the Tokyo leg of the tour. I don't remember a single thing from that museum except for a laser-and-music presentation which featured a technopop version of Vivaldi's "Spring" which was just great. The above video by uploader Tamás Webnyelv is a trance version but it is pretty close to what I remember hearing.

Getting that debut album by YMO and then obtaining their BEST tape a year later via my brother's graduation trip to Japan pretty much had me contracting what I would call "YMO on the brain". Basically, any excerpt of music that had a certain synthesizer in it had me salivating like Pavlov's dog wondering if it was a new YMO tune.


As I said, I was just getting into music on both sides of the Pacific as we all entered the 1980s so my naivete will be fully apparent. My Pavlovian response first occurred when I heard the opening of "The Message" by Grandmaster Flash & The Furious Five being used on a commercial during "Sounds of Japan". I had thought it was Yellow Magic Orchestra and wouldn't find out the true source until some years later.


Even though I don't really think it sounds technopop now, I even wondered about Michael Jackson's "Wanna Be Startin' Something" when I heard the intro for that one on an ad during "Japanese Panorama", a local show that used to air here on multicultural channel 47 here in Toronto. Ironically enough, Jackson would cover a YMO song years later, "Behind The Mask".


But back to the song at hand here. It's always great when a "new" YMO song percolates into my consciousness after having discovered them almost 40 years ago. "Radio Junk" not only has that technopop but there is something also very New Wave about it as if I could easily imagine British artists like David Bowie or the late Robert Palmer tackling it.

I'm not 100% sure but I believe it first came out on the band's first live album, "Public Pressure" in 1980. Composed by drummer Yukihiro Takahashi（高橋ユキヒロ）and written by Chris Mosdell, the pop and the techno seem to be having a friendly little duel as "Radio Junk" plays out, and I enjoy that twittering clarion call that pops up in the intro (for some reason, the above concert version didn't bother with it) like a public broadcasting alert.

When it comes to the lyrics, I'm kinda wondering if there is some thematic resemblance to another YMO song, "Citizens of Science" which relates about a society that merely plugs in and accepts everything that is fed to them. The radio is the target here for Takahashi and Mosdell but the happy music slightly blunts the indictment against the medium. 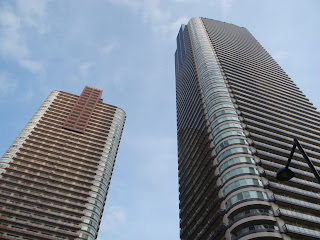