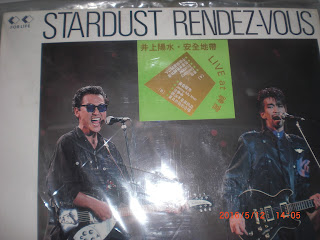 Well I did promise that I would cover some more of the tracks from Anzen Chitai's（安全地帯）"(VI) Tsuki ni Nureta Futari" album. That was way back in 2013. Shows how much of a steel trap my memory is; it's actually more of a rusty rabbit hutch.


Anyways to recap, I did say that the Hokkaido band's 6th album from April 1988 was a continuation of Koji Tamaki（玉置浩二）and his fellows' intention to go beyond the distinct sound which got them famous in the first place back in the early 1980s. There was the bombastic launch of the opening track "I Love You Kara Hajimeyou"（I Love Youからはじめよう）which made the discovery of love sound like a triumphant air show, my funky favourite "Jirettai"（じれったい）and the dreamy "Juliet".

Now, here I'm introducing another track "No Problem". If you can imagine Tamaki doing a really distant gig in the famous Mos Eisley cantina on Tatooine from "Star Wars", this would be the song he would perform. The original song has some zoot-suited speakeasy jazz filtered through some techno thingies as Tamaki goes wild behind the mike. I've got a feeling that he was making like a young Duke Ellington in the recording booth, and he definitely gets a whole lot less stoic in concert above.

As with all of the tracks on the album, it was another Koji Tamaki and Goro Matsui（松井五郎）collaboration. Those two certainly kept the variety end up with "Tsuki ni Nureta Futari". And with "No Problem", I couldn't help but be reminded of another novelty hit fusing old-style jazz and technopop.