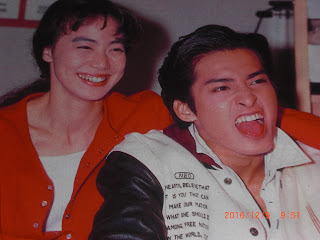 Not sure whether I've mentioned in this in any of my previous postings on Miki Imai（今井美樹）but there is that Japanese social media site called Mixi which is composed of various communities for people to join depending on the raison d'etre of those communities. There are a few for the singer with one specifically geared for her early career....namely before she hooked up with Tomoyasu Hotei（布袋寅泰）as her songwriter and later on, her husband.

This is not to say that I've particularly disliked Imai's music since the mid-1990s; in fact, I've already written about a number of her songs (which were indeed hits) and even one album with Hotei's contribution. But to be candid, if I had to choose between pre-Hotei or post-Hotei Imai, I would go with the former option. There was just some sort of thing between her and the arrangement of those songs back in the 1980s and very early 1990s that was special which I think was lost. However, of course, I know that a singer has got to evolve over time which means gaining new fans, losing some old ones and keeping the really dedicated ones.


Basically then, although I bought Imai's albums well into the 1990s, I've really only put her CDs from her debut in the mid-80s to the early 90s with any sort of regular rotation. Still as I said, her hits were still coming out well into the 21st century.

For example, one that comes to mind is "Goodbye Yesterday" which is a title that I often hear at karaoke and on any TV program which highlights any of Imai's music. Released in February 2000 as the theme song for the Fuji-TV drama "Brand" starring the singer herself as an employee at a fashion company, this was another hit with Hotei's stamp on it in terms of words and music. From the English portion of the lyrics, it's fairly obvious that the message from the song is about pushing ahead into the future which was probably the overarching theme for Imai's character in "Brand", and perhaps I can use it here to wave goodbye to 2016 and look forward to this coming year.

Listening to "Goodbye Yesterday", which is Imai's 18th single, I think the observation I can make here is that her ballads from the mid-90s onwards have taken on that rather epic quality, thanks to Hotei and especially those electric guitar instrumentals. Any official music video that may have existed for "Goodbye Yesterday" probably would have had, budget willing, Imai standing and singing atop a precipice overlooking hundreds of square kilometres of canyons while the sun is either rising or setting. Compare that to her 80s material which I found a lot more intimate as in spending quiet time in a local cafe.

"Goodbye Yesterday" went Double Platinum and peaked at No. 5 on Oricon. It ended up as the 46th-ranked single of the year as it sold over half a million copies. It was also included in Imai's 12th album "Taiyo to Hemingway"（太陽とヘミングウェイ...The Sun and Hemingway）which was released later in August 2000. The album also did very well by peaking at No. 2.
Posted by J-Canuck at 8:13 PM