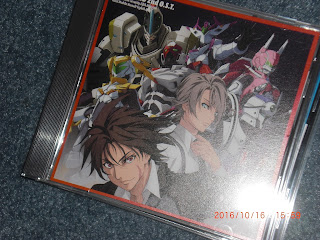 The previous year of 2016 had some pretty good anime for me. There were the calming slice-of-life shows such as "Flying Witch" (ふらいんぐうぃっち) and ones packing a bit more drama including the just-concluded "Hibike! Euphonium"（響け! ユーフォニアム）. Then there were the science fiction-adventures like "Kuromukuro" (クロムクロ) and "Active Raid". That latter show was quite fun as it mixed the usual armoured robots with the often-inane bureaucracy and personal interactions of working inside a company. However, I thought that final episode of the second season just crunched things together a little too quickly for my liking.


Illustrating my need for a guide book on the casts of characters and singers for the various theme songs, I didn't find out until well after the fact that there was one connection between "Active Raid" and "Hibike! Euphonium". And that connection was seiyuu/singer Tomoyo Kurosawa（黒沢ともよ）. She has been getting accolades on the scale of Meryl Streep about her performance as the main character of Kumiko Omae（黄前久美子）on "Euphonium" over that show's two seasons. There's even a YouTube video depicting all of her vocal quirks as you can see above. I figure she may as well start writing up her acceptance speech for any anime award she will get.


However, I also found out that she's been doing her fair share of anison. Kurosawa also had a minor role on "Active Raid" as the perky AI, Liko, and in-character, she provided the ending theme for the second season, "Field Trip!!" Instead of being an instant earworm, "Field Trip!!" did more of a slow burn to finally implant itself into my brain. Written by Mehko Yamamoto（山本メーコ）and composed by IKUO, I think the song is about Liko's desire to get out of her digital environment and enjoy a fun day out in the city. Considering some of the mayhem that happens even within Public Mobile Assault Unit Eight, I don't quite blame her.

I guess another reason that "Field Trip!!" has finally touched down with me is perhaps that the arrangement has some nostalgia, strange as it may be to admit. Shades of Ayumi Hamasaki（浜崎あゆみ）and Trance music keep dancing about in my head.