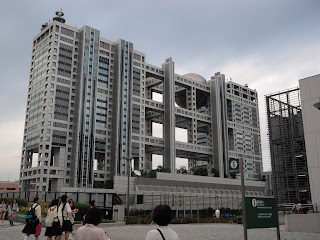 Happy Tuesday to you all! Hope all of you have managed to survive Blue Monday. I got my first bill from the good ol' folks at MasterCard today and it doesn't hurt too much. By the way, the above photo is of Fuji-TV down at Odaiba right by Tokyo Bay. Yeah, it has that Meccano kit look to it. My old friend who went to the Ontario College of Art isn't too much of a fan of the design but I'm OK with it. I remember seeing this construct as one of the very first structures on the man-made island when I visited Odaiba in 1995...there was really nothing but a few condos and a whole lot of sandy ground surrounding the TV station. Things have come a long way since then.


Well, it feels like I've already covered a good chunk of the tracks for Tatsuro Yamashita's（山下達郎）hit album "Melodies" but I feel that it's time to at least give some tribute to his June 1983 release. Did give his 7th album a listen late last night and was satisfied as usual. For the record, I've written articles on the following tracks from "Melodies": "Kanashimi no JODY: She Was Crying"（悲しみのJODY）, "Blue Midnight", "Kokiatsu Girl"（高気圧ガール）and "Christmas Eve".

I like those four tracks but I also love the song "Merry Go Round" (メリー・ゴー・ラウンド). I was reading the write-up for each of the tracks on J-Wiki and I came across this rather intriguing comment from Yamashita about this particular track. He commented that during those days whenever he composed a funk song and laid down the lyrics, he felt that there was this rather Ray Bradbury-type world would be whipped up. Now I have read my fair share of science-fiction but I'm not as familiar with Bradbury's material so I'm not quite sure what he meant by that. However by looking at those lyrics, I got the impression that this couple enjoying that midnight ride on that carousel in Tokyo's Korakuen amusement park was experiencing something more otherworldly.

Perhaps then that above video showing scenes from the incredible "AKIRA" was the right one for "Merry Go Round". Oh, it's pure Tats City Pop with that thumping bass, the groovy keyboards and his layered vocals. I gather that he was really getting into the beat with those background whoops.

Then, there is "Night-Fly"（夜翔...not sure how to pronounce the kanji here）, a nicely nocturnal and dreamy ballad which Yamashita wove from his impressions of the sound of sirens wailing off in the distance while living in Tokyo. That may sound rather odd but I can relate to that feeling. But for me, I would also add the faint sounds of the hustle and bustle of life down on the ground and even the sight of those slowly blinking red warning lights on all of the skyscrapers in The Big Sushi.

I also found out on J-Wiki that the singer-songwriter had also created the English title with the hyphen since he didn't particularly want any letters of inquiry from the representatives of Donald Fagen because the fellow from Steely Dan had come out with his great album "The Nightfly" the previous year. That album is also on my shelf and it is one of my favourites as well.


I couldn't find any other of the tracks that hadn't yet been covered by me represented on YouTube but I did want to give some attention to Yamashita's cover of "Guess I'm Dumb". As I said, I couldn't find that song so here is the original song as performed by Glen Campbell in 1965.

One of my thoughts about Yamashita in terms of his musicality and delivery was that he should have been made at least an honourary member of The Beach Boys. So I guess there is a certain rightness about covering this tune created by Brian Wilson and Russ Titelman for Campbell (another TV presence from my time as a toddler) who also had his time with the The Beach Boys. The Wikipedia article on the song mentions it as well but "Guess I'm Dumb" also has that grand Burt Bacharach horn arrangement in there. I was also attracted to the lyric "I guess I'm dumb but I don't care"; sounds like the perfect mantra for me.😆

"Melodies" hit No. 1 on Oricon and became the 7th-ranked album of the year.
Posted by J-Canuck at 9:06 PM